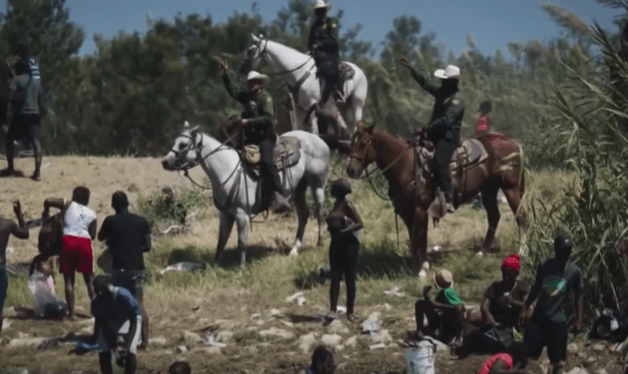 DEL RIO, Texas — After several prominent members of the Democrat party railed against horse mounted Border Patrol agents, falsely accusing them of “whipping” Haitian migrants in September, no one wants to investigate the concocted allegations.

Let’s be clear about who made the false accusations. They came from President Joe Biden, Vice President Kamala Harris, and DHS Secretary Alejandro Mayorkas, among others in the party. Their cumulative voice set a conclusive tone of “guilt” for the lying media to run with. However, the truth is known, so the case has become a “hot potato” that no one wants to touch.

Perhaps that is because the independent star witness, the man who snapped the controversial photographs, Paul Ratije, immediately said the pictures were “misconstrued” and that agents NEVER whipped anyone, New York Post reported.

Yet the truth doesn’t matter when Dems need a narrative. The pictures along with the “anti-police” talking points made the rounds, while the agents were vilified.

Since the lying politicians knew the false narrative would be uncovered, they let the dust settle and did nothing, despite promises to quickly resolve the alleged “misconduct.”

The DHS announced Tuesday that U.S. Customs and Border Protection (CBP) initially referred the investigation to the Office of Inspector General (OIG), but that the OIG declined to investigate. As a result, the lackluster matter was bounced back to CBP’s Office of Professional Responsibility (OPR), which is the office charged with investigating alleged misconduct of CBP employees. Now, they have no choice.

Any investigator who has had more than one cup of coffee at his or her (we love using authentic pronouns) desk would be able to view the video and interview the photographer before concluding the politicians who seem vested in disparaging law enforcement over and over again, are lying.

People like “Sleepy Joe” misidentified the agents’ split reins, which they use to control the horse, as “whips” and accused the agents of whipping the migrants.

Hence, the OPR (likely under direct orders) is currently reviewing videos and photographs, as well as interviewing witnesses, employees, and CBP leadership in relation to the Sept. 19 incident in Del Rio, Texas. Hopefully, they will start with the photographer.

“Some of the Haitian men started running, trying to go around the horses, and that’s kind of when the whole thing happened.” Ratije said, according to the Post.

“I didn’t ever see them whip anybody, with the thing,” the photographer said of the reins. “He was swinging it. But I didn’t see him actually take — whip someone with it. That’s something that can be misconstrued when you’re looking at the picture.”

However, not missing an opportunity to appear virtuous, Biden’s veep was one of the first to dog pile on the hard working agents.

“What I saw depicted about those individuals on horseback treating human beings the way they were, was horrible,” Harris told reporters on Sept. 21. “And I fully support what is happening right now, which is a thorough investigation into exactly what is going on there. But human beings should never be treated that way. And I’m deeply troubled about it. And I’ll also be talking to [DHS] Secretary [Alejandro] Mayorkas about it today.”

Mayorkas said in September that the investigation of the agents on horseback would “be completed in days, if not weeks.”

Well, here we are, nearly two months later and the inquiry (heading toward the gallows?) is shamefully underway.

Once the OPR completes its investigation, the results will be provided to CBP management to determine whether disciplinary action is appropriate and, if so, the specific discipline to be imposed, the DHS said Tuesday.

Meanwhile, where are the agents involved in this fiasco, sitting behind a desk while illegal migrants continue to flood the border?