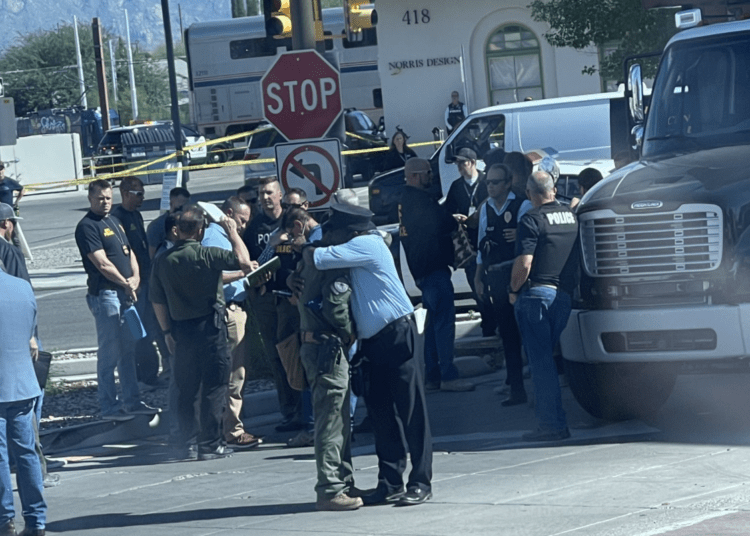 TUCSON, Ariz. — A shooting broke out at a Tucson Amtrak station leaving a DEA agent and suspect dead, and multiple officers injured, according to reports.

The shooting took place about 8 a.m. Monday at a train station in downtown Tucson. Amtrak spokesman Jason Abrams told Fox News the Sunset Limited, Train 2, was traveling from Los Angeles to New Orleans, with 137 passengers and 11 crew members aboard. Everyone was evacuated from the station.

Abrams confirmed that crew and passengers avoided injuries in the gunfire. Amtrak is working with local and federal authorities, he added.

Security footage catches multiple shots heard from inside a train before a man, who appears to be a K9 handler, boards in the middle of the second-to-last car through an open door. Two bystanders subsequently back away and then run past a baggage cart, joining four others as they enter the last car and the door slides shut, Fox reported.

(Editor’s note: The security footage was published in a tweet, but has since been deleted.)

Tucson Police Chief Chris Magnus confirmed the shooting suspect on the train was dead and a second suspect was taken into custody.

He said the Counter Narcotics Alliance boarded the train Monday morning to do a routine check for money, drugs and firearms.

He said CNA made contact with two individuals on the second level of the double-decker train. One suspect was taken into custody while the second, a Hispanic male in his 20s or 30s, pulled out a handgun and opened fire, KOLD reported.

The chief also confirmed a DEA agent was murdered. A second agent was critically wounded and taken to Banner UMC.

“Tragically, this morning, two DEA special agents and a DEA task force officer from the Tucson Police Department were shot during a law enforcement operation in Tucson,” said Special Agent in Charge of the Phoenix division Cheri Oz. “We at the DEA are heartbroken by today’s events and ask that you keep the families of the agents and task force officer in your thoughts and prayers.”

A Tucson police officer was also injured in the shooting after rushing to the train to help when he heard shots fired. Magnus said the officer is in stable condition and is expected to survive.

Magnus said the suspect was found dead after barricading himself in a bathroom on the train. It was not clear if the suspect was shot by agents or if he took his own life, the chief said, according to KOLD.

Evan Courtney was in a lounge car when people suddenly came running in yelling: “Shots fired!”

“I grabbed my backpack and ran,” he told The Associated Press via Twitter direct messaging.

I caught this heart breaking moment of two officers at the scene of the fatal shooting at Tucson Amtrak Station. The @Tucson_Police @FBI have been superb. I’m safe due to their fast action. @TucsonStar @whatsuptucson @KVOA pic.twitter.com/WPB8BmRzyd

He later tweeted photos of officers embracing each other.