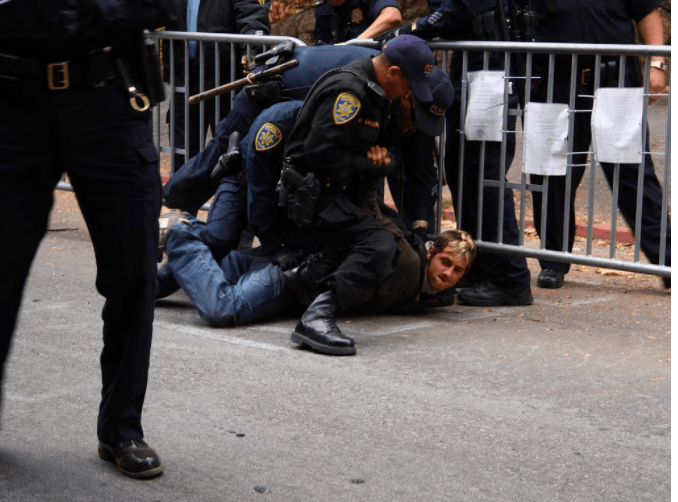 byMatt Loeslie
Share and speak up for justice, law & order...

Before examining a de-escalation tactic at the end of this article, we have to define the boundaries in which de-escalation can occur.

I once conducted a traffic stop involving a stolen vehicle with a driver who was drunk and fled from me on foot after the vehicle stopped. When I caught up to the suspect, he was confrontational and resisted arrest. I am convinced there was not a de-escalation strategy in the world which could have gained the suspect’s cooperation. The only way this situation could have ended without a struggle is if I just decided to let the suspect leave the scene without any enforcement action. In fact, choosing not to enforce the laws would de-escalate many situations. However, officers take an oath to uphold the Constitution and the laws of their jurisdictions so walking away is not an ethical de-escalation strategy. De-escalation can only take place when there is time and opportunity to reduce the intensity of a conflict.

Most recently, discussion about the need for police to recognize the “Sanctity of Human Life” has occurred. The Chicago Police Department and many other police policies now include the term sanctity of human life in their policies to coincide with the term de-escalation. The concept of sanctity of life stresses that officers will act with the regard for the preservation of human life and the safety of all persons involved. While the idea of the sanctity of human life is noble, it is not a reasonable concept for making life and death decisions in a dynamic situation. Sanctity of human life fails to recognize a priority of human life. Officers are sometimes faced with circumstances where the actions of violent criminals will require a prioritization of the lives of all persons involved. The safety of innocent people and officers will take priority over the safety of a violent criminal who created the dangerous situation while engaged in crime. For example, if there is a hostage situation it may be required to end the life of the hostage taker to save the hostage. Yes, all lives are sacred; however, not all lives have the same preservation status under life and death circumstances.

According to the Oxford Living Dictionary, the definition of de-escalate is to “reduce the intensity of a conflict or potentially violent situation”. The irony is experienced officers know sometimes officers need to increase the intensity in order to ultimately “de-escalate” or defuse a situation. In many situations I had to use strong verbal commands early (Get down on the ground!) in order to bring a matter to a successful completion. Had I reduced my intensity early, the situation would have continued to escalate with disastrous consequences. The term de-escalation taken literally (reduce the intensity) limits officers’ options to respond effectively. The negative effects of the term de-escalation are officers can too often think in terms of always “reducing the intensity” which has the potential to put innocent lives at risk. De-escalation has become a political buzzword in recent years. I wish better terminology would have caught on like “gaining compliance”. Ultimately, officers need to be skilled communicators who use force when it is objectively reasonable under the totality of the circumstances.

THE IDEA OF PRE-SUASION

Robert Cialdini, PhD wrote important books called Influence: The Psychology of Persuasion and Pre-Suasion: A Revolutionary Way to Influence and Persuade. These books are not written as law enforcement guides; however, they explain the psychology of why people say “yes”—and how to apply these understandings. Using principles from Roberts’s research can help law enforcement influence suspects willingness to comply.

Have you ever been in a situation where you were talking to a suspect and other officers were talking to victims and witnesses at the scene trying to figure out what happened? However, you have the suspicion you might be placing the suspect under arrest in the near future.

A compliance method which might be worth trying is before the “you’re under arrest” moment, say to the suspect “Excuse me, do you consider yourself a reasonable and cooperative person?”  If they say “Yes” according to Roberts’s research, the suspect will tend to want to be consistent with their statement that they are cooperative. The suspect will be more likely to cooperate later because by asking the suspect this question you have programed them to cooperate. If they say “No,” well, at least you have your suspicions confirmed the suspect might get combative.

De-escalation is not a new concept. Officers have been practicing gaining compliance so that officers don’t have to use force for a long time.

Share and speak up for justice, law & order...
Tags: compliancede-escalationtactics

Matthew Loeslie is the Criminal Justice Program Director at a State University. Prior to the University, Matthew was responsible for Law Enforcement Training at a Community and Technical College where he coordinated and instructed law enforcement classes throughout the Midwest. Furthermore, Matthew has experience working in law enforcement. In addition, Matthew helped launch the law enforcement training program at the MERIT Center in Marshall, MN. Matthew enjoys spending time with his family, reading, shooting and motorcycle rides.