'There is no doubt that without the deputy’s quick action and bravery several vehicles would have been struck at high speeds,' Sheriff's Office says 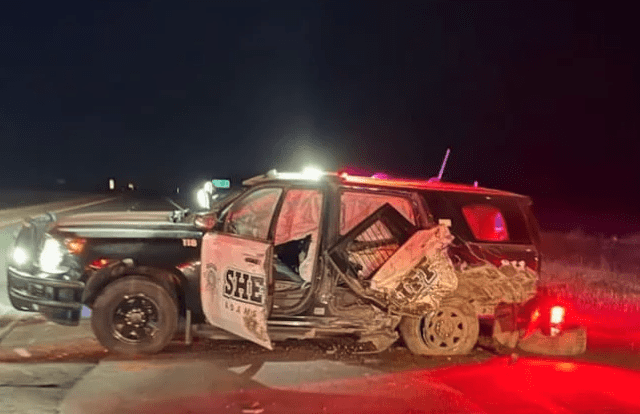 A deputy used his patrol unit to intervene with a wrong-way driver. (Adams County Sheriff's Office)

ADAMS COUNTY, Colo. – A deputy in Colorado used his patrol unit to intervene with a wrong-way driver Monday on a highway.

A driver was traveling westbound in the eastbound lanes on Interstate 70 in Adams County about 11 p.m. on Monday, the Washington Examiner reported.

Arapahoe County deputies and troopers of the Colorado State Patrol had unsuccessfully tried to stop the vehicle when they notified the Adams County Sheriff’s Office of the circumstances.

As a result, a deputy with Adams County placed his vehicle between the oncoming wrong-way driver and other motorists, many of whom had pulled over at mile marker 328 as they tried to avoid disaster.

The 83-year-old driver who was traveling in the wrong direction on the interstate struck the deputy’s patrol SUV. Fortunately, the impact did not leave any parties with major injuries.

“The impact pushed both vehicles over 140 ft and into the front of a stopped semi-truck,” the Sheriff’s Office said. “We are thankful that the only casualties were the vehicles involved. There is no doubt that without the deputy’s quick action and bravery several vehicles would have been struck at high speeds and lives would have been lost.”

The CSP is leading the investigation. According to CBS Denver, law enforcement personnel do not believe impairment was a factor with the elderly driver.