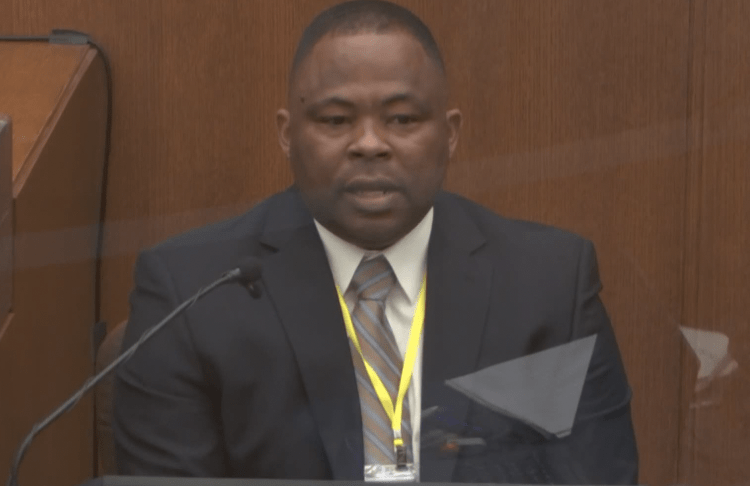 Minneapolis, Minn. — On Tuesday, the trial of Derek Chauvin ended with the prosecution’s expert on use of force on the stand, Los Angeles Police Sergeant Jody Stiger. As testimony began on Wednesday, Chavin’s lawyer, Eric Nelson, cross-examined Stiger for over an hour and those that are familiar with “experts” in law enforcement, that are certified for court proceedings, are questioning the use of Stiger, considering the magnitude and importance of this case.

Indeed, Law Officer reached out to several renowned court experts that have years of experience in criminal and civil trails testifying on police matters and there should be much to question on why the State used, what appears to those we spoke with to be an inferior expert.

We have compiled several concerns that were brought to our attention by police “experts” that often testify in law enforcement cases both criminal and civil. The details below were gathered from Stiger’s testimony on the stand and gleaned from what appears to be a methodical questioning process by Nelson that early on causes the prosecution to call for a recess.

This was a huge red flag for the experts we reached out to. Granted, the majority of expert case work is conducted long before any trial and most civil cases are settled prior to trial but any seasoned expert, with the appropriate work in the field, will see actual trial testimony.

While Stiger answered “In LA during a trial use of force that I was investigator for,” that does not sound like he was actually qualified as an independent expert in court but rather testified in a criminal trial that he investigated. The difference between the two is night and day. Nelson did not dive into that answer so we do not know at this time but it does beg the question in a case with this profile and on use of force where there are hundreds of “experts” qualified, why was Stiger chosen for the State?

It is not uncommon for a court recognized police expert to not review all the materials they were provided. Often, attorneys provide them with information that does not apply to their opinion but not reviewing actual training videos given to Chauvin seems rather strange. Stiger provided an expert report that was 461 pages long but just 26 of those pages were his actual opinion and the rest comprised “a list” of materials he was given to review.

While Stiger’s qualifications were suspect at best with the experts we talked to, his answers to the defense surrounding the “Graham v. Connor” standard was the most egregious to them. According to one expert, “any expert knows this is what it is about. Any opinion given while serving as an expert witness on use of force needs to be couched with this standard in mind.” It was this line of questioning that may have hurt the State’s case the most. As Nelson discussed the “totality of circumstances” standard, Stiger admitted that an officer must rely on information given by a dispatcher, which was a priority one call with a suspect “six to six and half feet tall.”

When asked “Reasonable for officer to respond differently for officer to respond to large intoxicated person than a small person,” Stiger replied “I’ve seen small people be more dangerous.” That answer essentially tells the jury that anyone can be dangerous to law enforcement. When told about the 911 call from the scene with screaming in the background that caused dispatch to send a second officer, Stiger said that he had not heard that call.

Stiger admitted that with all the information the officers had at the time, it would be reasonable for them to have a tightened sense of alert to the call. Stiger admitted that Floyd was resisting officers and when asked about his report that said officers were displaying “futility of their efforts” in attempting to get Floyd in the car, Stiger said that he did not remember using those words even though they were taken from his own report.

Stiger admitted that suspects in handcuffs can still pose a threat to officers and he said that it was reasonable for officers to call paramedics to the scene as they did. Stiger also agreed that placing Floyd on the ground and the decision to not use additional force was a form of “de-escalation.”

The experts that we spoke to were shocked that a fee of that magnitude would be paid to someone with, at most, one expert case on their resume. Multiple experts told us that a standard starting fee for expert work would be a retainer for $2000-$4000 and an overall hourly rate of $150-$200 but the retainer would cover the first 20 to 30 hours of work. While it is possible that Stiger provided enough hours for a $10,000 flat rate, the use of a “flat rate” in expert case work is odd, considering it is always unknown how much time will have to be dedicated to the case.

Here are some additional conversations with Sergeant Stiger:

Nelson: “Do you participate in training or present a training “Awful but Lawful.”

Nelson: “Sometimes the use of force looks really bad?”

Stiger: “Yes, based on policy or state law. I did a presentation at a conference for that.”

Ultimately, the jury will have to decide whether Sergeant Stiger has the background and qualifications to be the “use of force” expert on what is no doubt the highest profile use of force case in a generation.

Regardless, one has to wonder, given his lack of experience in the area along with some of his responses, was Sergeant Stiger appropriate for the State, given the complexity of this case?