A six-year-old girl, later identified by family as Blessings, was killed in the crash. A 15-year-old girl remains hospitalized with a traumatic brain injury, internal bleeding, and bruising to her liver. 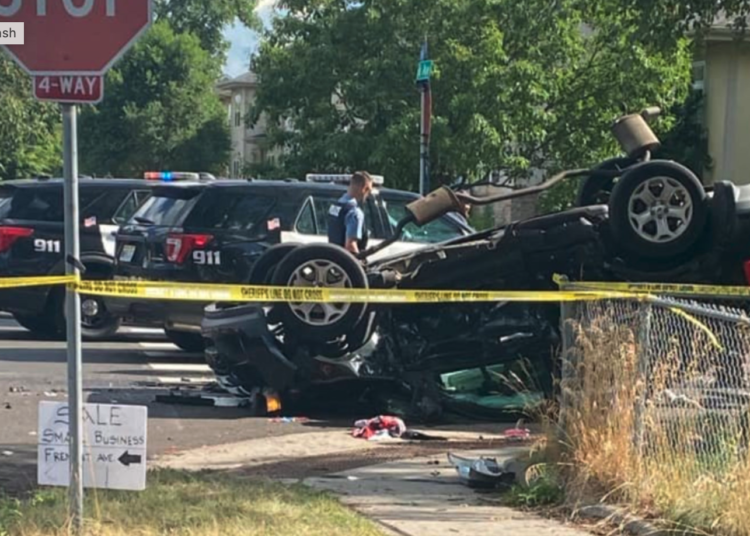 A vehicle at the crash scene of 53rd and Humboldt Ave N. (Facebook/B'Jae Klatt)

BROOKLYN CENTER, Minn. – A murder suspect killed a six-year-old and left a 15-year-old with a traumatic brain injury when he hit their family’s car while fleeing from police last week.

The 28-year-old is already facing second-degree murder charges in connection to the April murder of Devan Trevon Dampier in Minneapolis. A warrant was issued for his arrest last week and Brooklyn Center police were tipped off to his whereabouts on Friday.

Two officers located him in his vehicle near 57th Avenue North in Brooklyn Center and attempted to make an arrest. But Muhammad put his car in drive and began to flee, according to a criminal complaint.

Several squads joined the pursuit as Muhammad reached speeds of up to 94 mph.

“Without stopping for the posted stop sign, Defendant crashed into the Ford Edge causing it to flip over. The Ford Edge was occupied by five people, an adult driver and four children. Officers looked into the upside down Ford Edge and saw children in the car. Officers tried to open the back door, but it was crushed and pinned in place,” the complaint states.

A six-year-old girl, later identified by family as Blessings, was killed in the crash. A 15-year-old girl remains hospitalized with a traumatic brain injury, internal bleeding, and bruising to her liver.

According to a GoFundMe started for the family, they were traveling home from a waterpark at the time of the crash. Muhammad was expected to make his first court appearance Wednesday and bail was set at $2 million, according to Crime Watch Minneapolis.

“Our heart goes out to the family of the young girl who died from the injuries sustained from a car crash that occurred in Brooklyn Center Friday afternoon. This innocent life lost, at six years old, should never have happened,” said Imran Ali, attorney for the Minnesota Police and Peace Officers Association. “Instead, a violent criminal, evading capture on an arrest warrant for murder, chose recklessly to take the life of another innocent victim. We demand immediate justice for this family.”