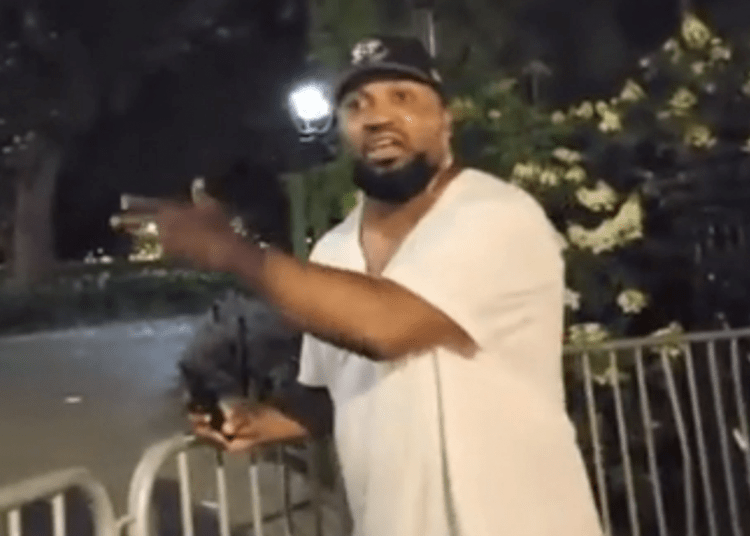 NEW YORK — An obnoxiously irate career criminal who was recorded going on a racist rant against an Asian NYPD officer during protests in Washington Square Park earlier in June was busted by the feds on Friday, according to the FBI.

Shermaine Laster was taken into custody at JFK Airport on an arrest warrant filed in the Norther District of Texas, charging him with being a felon in possession of a weapon, according to an FBI spokesperson, New York Post reported.

“I’m on the sidewalk, what you gonna do?” Laster can be heard screaming at Huynh on the video. “What’s your name? You’re not even from this country. You piece of s–t. You f–king ch–k!”

Another officer intercedes and attempts to de-escalate and calm the man down, Law Officer reported.

Nevertheless, Laster continues to yell the racist slurs, which further brings attention to his caustic comments. At one point, a passerby on a bike chimes in, telling the man his racist rant is “f–ked up.”

According to the Post, Laster has a lengthy criminal history that includes 13 prior arrests, including seven felonies, police sources told the news outlet. Four of his prior arrests were for weapons-related charges, the sources added.

The New York City Police Benevolent Association commented earlier in the month about the defamation.

“Criminals know that politicians are all talk. They know there are no real consequences for their vicious anti-Asian hate, even when it’s directed at a PO. If the pols really want to ‘Stop the Hate,’ they need to stop demonizing cops first.”

A statement from NYPD called the incident “disturbing.”

“Each day, NYPD officers are expected to maintain a level of professionalism under an array of difficult circumstances,” a police spokeswoman said. “In this instance, an Asian police officer was subjected to an ugly onslaught of racial slurs and maintained his composure. However, it is disturbing to see this type of language used against any Asian person in light of the disturbing increase of Asian hate crimes citywide.”