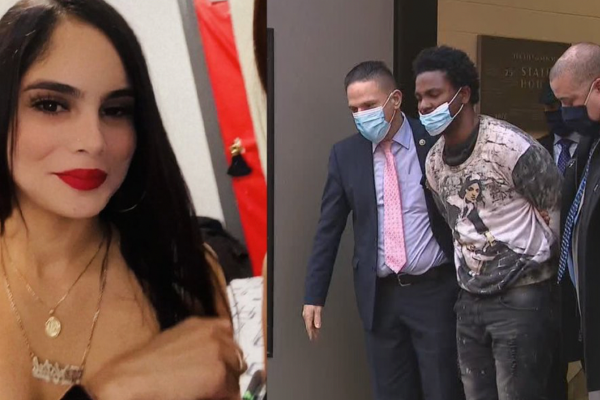 New York City – A career criminal yelled ‘America’s gonna burn’ after being arrested in the murder of a 19-year-old Burger King cashier during a robbery this week. The Daily Mail reports that Winston Glynn, 30, was tracked down in Brooklyn after an intense citywide manhunt following the shocking murder of Kristal Bayron-Nieves at the East Harlem Burger King, where NYPD officials said Glynn previously had worked

Glynn was being led out of the 25th Precinct after being booked Friday afternoon when he launched into his rant as people called him a murderer in Spanish.

Mayor Eric Adams attended a precinct press conference where he did not mince words.

“He murdered that child. He had no regard for the people he assaulted with that gun inside the restaurant,” Adams told a packed room.

Police revealed that Glynn allegedly shot Bayron-Nieves as she was crouching by a cash register, which she tried to open in order to comply with his demands for more cash, but could not because she did not have a key.

Glynn was apprehended in the Bedford-Stuyvesant section of Brooklyn on Thursday night, after police say they used surveillance video to track his movements from Harlem.

Cops revealed that a pair of white earbuds hanging from the murder suspect’s pants helped lead them to the Glynn.

Glynn was filmed yelling unintelligibly, hurling profanities and grimacing as he was being led out of the 25th Precinct on Friday afternoon.

Winston Glynn was arrested by “The Greatest Detectives in the World” for the murder of a 19-year-old girl at a Burger King in East Harlem. DEA members never rest until justice is served.
pic.twitter.com/pD8GIc5y4I

As he was being placed in the backseat of a vehicle, he howled, ‘American is gonna burn!’

Glynn has an extended criminal history, which includes charges of criminal possession of a weapon, counts of menacing and menacing with a knife and criminal mischief.

According to the New York Post, citing police sources, Glynn is a Jamaican national and is not a US citizen.

Police recounted how just before 2am on Sunday, Glynn allegedly walked into the fast-food restaurant, wearing a ski mask, an all-black outfit, and carrying a backpack. He had white earbuds hanging out of his pants pocket.

Glynn allegedly pistol-whipped a customer and a manager, knocking out two of her teeth, and then aimed a gun at Bayron-Nieves, demanding cash.

The 19-year-old cashier handed the attacker $100, but he demanded more money. Police said Bayron-Nieves crouched down to try and open a second cash register drawer, but had no key. That is when Glynn fired a single shot and fled, grabbing the injured Burger King manager’s phone on his way out.

Bayron-Nieves was pronounced dead at the scene.

Chief of Detectives James Essig said that dozens of police officers canvassed surveillance video from the subway system and spotted a man wearing different clothes than the suspect in the Burger King video, but with the same white earbuds hanging from his pocket.

They eventually tracked down Glynn to an address on Patchen Avenue in Brooklyn and arrested him without incident on Thursday.

The gun used in the killing has yet to be located.

The chief of detectives added that all evidence indicates that Glynn had pre-planned the armed robbery at his former place of employment.