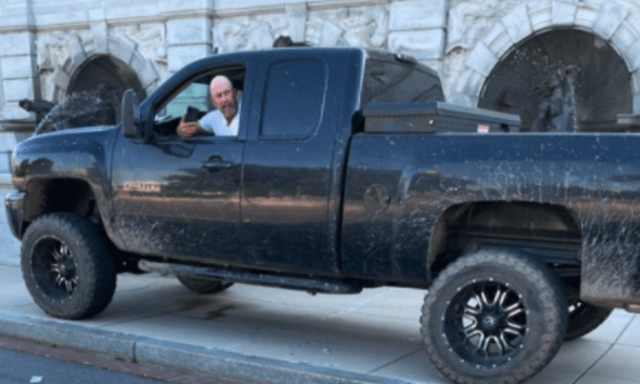 Floyd Ray Roseberry surrendered to police Thursday after threatening to be in possession of a bomb in Washington D.C.(Twitter)

WASHINGTON — A suspect who claimed to possess a bomb in his pickup truck Thursday morning in Washington D.C. is in custody. The man who parked his vehicle in front of the Library of Congress while making threats, which caused evacuations and lockdowns surrendered peacefully to police, according to reports.

Floyd Ray Roseberry was identified as the man arrested by authorities at 2:15 p.m. He is a resident of North Carolina. His truck—reported as a suspicious vehicle—was parked in the area of Independence Ave. and First Street, Fox News reported.

Bomb experts were still sweeping the area as federal agents have also made their way to his North Carolina home, sources said. At the time of publication it is unknown if explosives have been located.

JUST IN – Suspect who made a bomb threat near the U.S. Capitol got out of his vehicle and surrendered to law enforcement.pic.twitter.com/ji8yl3z9Nb

United States Capitol Police Chief Thomas Manger said Roseberry had recently experienced “losses of family” and said investigators were in contact with his loved ones.

“We don’t know if there are any explosives in the vehicle. It’s still an active scene,” Manger said during the afternoon press conference. “While Mr. Roseberry has been taken into custody and has been removed from the scene. We still have to search the vehicle and render the vehicle safe.

Shortly after the call came in about 9:15 a.m. and the first officer arrived on scene, Manger said the suspect was seen in possession of a suspicious item in his hand, according to Fox.

“The driver of the truck told the responding officer on the scene that he had a bomb. And what appeared, the officer said, appeared to be a detonator in the man’s hand,” Manger said. “We immediately evacuated the nearby buildings.”

Police have said the investigation is ongoing while lawmakers were not threatened as they are out of the area for their August recess.