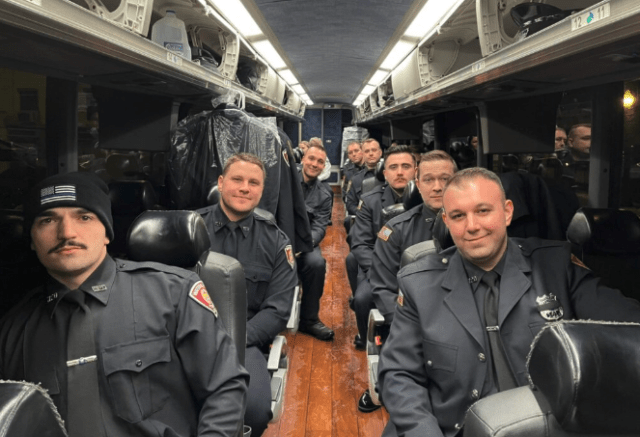 One of the fascinating aspects of joining the men and women whose mission is to provide public safety is the inherent camaraderie law enforcement officers revel in as selfless crimefighters managing to endure daily perils.

You’ve likely heard the monikers “I got your back” or “I’ve got your six” or “Let’s do this!”

All of those apply while on The Job. Yet many more humanistic feats occur when off duty, when cops make attempts to regroup and settle the many flurries of unimaginable things experienced serving the public, amid whom are the minority raising Cain and garnering more than a lion’s share of misappropriated attention.

Traditionally, when police officers convene and trade barbs and in-the-know comments correlating raw analogies about a horrific scene, outsiders may be perplexed by the dialogue.

In that light, just about any industry or profession likely has its pseudo-language to convey and understand each other. Not to be snobbish but to swiftly make a point and have it comprehended, with confidence, that the recipient is on the same page, employing relative coping skills.

In policing, numerical codes are the language of law enforcement exposed at the academy —if not beforehand— and practiced throughout the cop’s career. Same as with police dispatchers who take the calls from perhaps long-winded complainants, distilling down and conveying the gist of matters via numerical codes for the sake of brevity and pointedness.

No one ought to be tying up the police frequencies with tons of chit-chat. Just give the meat of the matter and free up the radio in the event, God forbid, an officer abruptly comes under fire and needs to key up to summon help. Even when meeting for a pizza, off-duty officers text others that they’re on the way or arriving via cop-centric numerical codes.

Police acumen is not necessarily a language of love. Police duty, however, is undoubtedly a labor of love. The bottom line is ensuring each other gets to go home at the shift’s end, again and again. That includes certified police dogs, whose camaraderie is of a different breed yet just as loyal.

Law enforcement forums typically contain announcements and/or depictions of many police retirees’ breakfasts or luncheons or dinners, whereby men and women who have survived the onslaught of perils get to subdue their guard and walk down memory lane and the good ole days.

Invariably, comparisons are made to bygone eras of policing versus modernity’s bizarre slant against public safety, with criminals freely roaming and brazenly maiming and murdering.

Gladly, though, are the moments reminiscing “back in the day” episodes, when law enforcement was respected far more than we witness nowadays.

I experienced both of these dynamics recently while breaking bread with a retired police sergeant under whom I worked a midnight-shift beat. Over lunch, at an eatery typically patronized by on-duty law enforcement deputies and police cadets being trained at the relatively nearby firing range, past and present state-of-affairs in policing came up.

Surprisingly, this buddy and I recalled names of people (victims and witnesses) with whom we interacted, many due to dire circumstances, and rehashed the peaks and valleys of each now-historical incident archived in police databases.

The banter stemming from the “funny calls” back then was just as fresh and robust today, as if it were experienced just yesterday. Then there were the straight-faced recollections of not-so-pretty chapters such as injured colleagues. Slain cohorts epitomize the depth of how reliant cops are on one another, with the picture-perfect Honor Guard and police helicopter fly-overs and riderless horse…the whole nine, followed by a 21-gun salute. Deep indeed…

Speaking of depth, there’s also distance. In the recent NYC Marathon, there were plenty of NYPD cops running among tens of thousands. Cheering them on were uniformed, on-duty officers showing support.

Even in vastly different geographic regions of the United States, lawmen and women with badges take treks to where other cops are in dire need, such as after a monstrous hurricane hits and life is upended by nature.

As we’ve published here on the pages of NPA, city cops and county deputies and state troopers were flooded by Hurricane Ian in the SW Florida region last month. Unsurprisingly, the mindboggling water surge was followed by a mind-easing flood of law enforcement officers from many points, some well outside of the immediate jurisdiction decimated by the latest natural disaster.

With that, rebuilding efforts commenced by the virtuous hands of police officials whose crimefighting abilities are not the only traits under their belts. It is always heartwarming to witness the infinite response during the most tragic times for cops —police funerals and unstoppable forces of nature— melding together LEOs from all over, engaged in one common cause. Without question. Sans solicitation. Just justice hands clamoring to help everyday cops when the citizenry’s public servants are constrained.

Having dealt with recurring cancer in my police career, it was always cops who just did what had to be done while I endured surgeries and recuperated. Many off-duty police officers upheld household responsibilities and chores and sustenance while I was down and out of the game for a spell, caring for my family as if they were blood relatives. I never asked. They came anyway. And that is the ultimate notion giving birth to our topic today.

As this writer battens down the hatches for yet another major storm headed to the Sunshine State, public safety professionals still reshaping the landmass carved by Hurricane Ian’s wrath are voluntarily joined by a batch of cops from Biloxi, Mississippi, a jurisdiction roughly 693 miles away.

Rubbing elbows at chow tables laden with good eats prepared for hardworking deputies and city cops, continually recalibrating the seaside jurisdictions wiped by natural forces, the Lee County Sheriff’s Office was honored by the selfless presence and service of police brothers and sisters from a faraway city. One that knows well the devastation and associated hardships of people caught in hurricane pathways, looking to LEOs for that extra hand with getting back on both feet.

“Biloxi PD traveled to Lee County to feed our [Lee County Sheriff’s Office] members! We were treated to lunch and dinner of fried shrimp and jambalaya.

“Biloxi PD Major Harold Wisdom said: ‘LCSO is living the nightmare we had with Hurricane Katrina. Our brothers and sisters in law enforcement helped us during our time of need. We are paying back the generosity.’”

From the depictions I viewed, it appears Biloxi, Mississippi officers drove southeast in police utility vehicles, with a covered wagon attached, in which were all the accouterments to prep and serve meals for those on duty. Service with a smile…so those in service can smile.

I’m not wondering if Biloxi PD officers will return the favor…I know they will, based on camaraderie among cops and the bonds among public safety officials, both active and retired.

The most heartrending display of camaraderie among cops is when police officials from faraway locales make the trek to a slain cop’s funeral and final call. A baker’s batch of cops from various Upstate New York police departments boarded a bus and headed to Manhattan for slain NYPD Police Officer Wilbert Mora’s sendoff earlier this year:

“Today, we’ll once again stand shoulder to shoulder with our law enforcement partners from around the globe to render a final salute to a hero who gave his life serving others. We join many in vowing never to forget Officer Mora and his legacy.” That honor was from February 2022, replicating others like it, depicting cops from all corners meeting where badges bunch together during chapters of casualty.

It is the aspect of thoroughly forged bonds among cops I miss dearly: Police officers work in dark spaces together and imperatively help one another to see the light…under any circumstances.

About the author: Stephen Owsinski is a retired law enforcement officer whose career included assignments in the Field Training Officer (FTO) unit and the Community Traffic Safety Team (CTST). He is currently a researcher and writer who maintains a finger on the pulse of the police profession. Follow Stephen on Twitter @uniformblue.

Share and speak up for justice, law & order...
Tags: Camaraderiefriendslabor of lovepartnerspeerspolice family