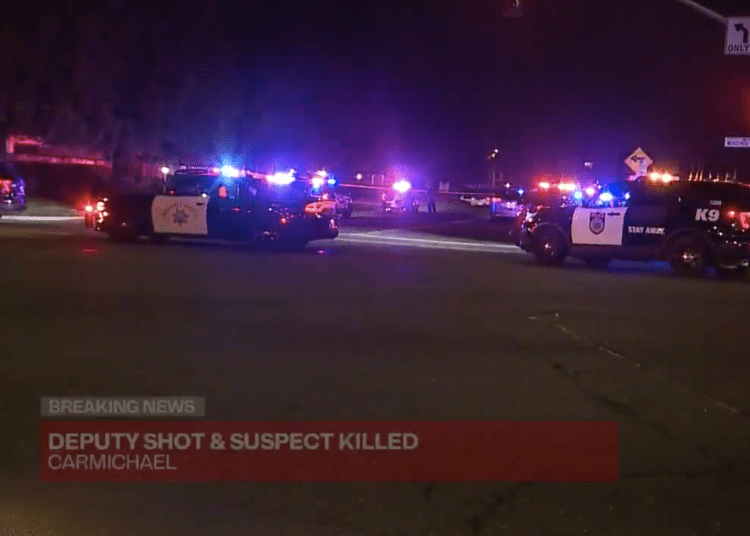 CARMICHAEL, Calif. — A California sheriff’s deputy has been wounded, a suspect is dead, and another was taken into custody Friday night after a shootout, according to reports.

The unidentified Sacramento County deputy, 47 years old, was a 15-year veteran who was undergoing surgery after the incident, FOX 40 of Sacramento reported.

The confrontation occurred about 8:15 p.m. in Carmichael, a suburb of Sacramento that has about 64,000 residents, according to FOX.

Other suspects were believed to remain at large. Residents near the crime scene were advised to stay inside and lock their doors, the report said.

Police searched for the remaining suspects until around midnight, Sgt. Kionna Rowe, a sheriff’s office spokeswoman, told the Sacramento Bee.

#UPDATE: @sacsheriff says one suspect is in custody. They are unable to confirm if there are any more people they are searching for. Still asking people to stay inside. They couldn’t tell us how much longer this will remain an active scene. @FOX40 1/2 https://t.co/NPHOhRVK5X pic.twitter.com/BQuYNuDDQ9

Authorities from several agencies remained in the area overnight, the Bee reported, and a sheriff’s helicopter was deployed as well.

According to a FOX 40 live report, deputies responded to a call of shots fired near Rampart Drive and Ranger Way. Upon arrival the deputy engaged the suspects, but not much else was provided.