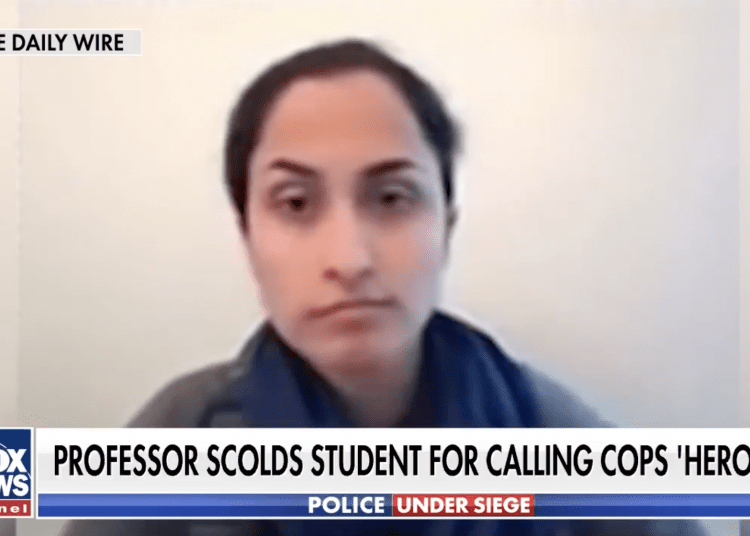 A Cypress College professor in California was placed on leave after disrespecting a student who say police are "heroes." (Screenshot

CYPRESS, Calif. — It seems that academia’s unbridled wokeism has limits after all. At least in this case, where the offensive professor didn’t have tenure. A left-wing California college professor who defended cancel culture and repeatedly talked down to a student who called police “heroes” has herself been canceled after video of the virtual class went viral, Fox News reported.

The unidentified, first-year adjunct professor at Cypress College in Cypress, Calif., claimed she would be in “more danger” if she called 911 during an armed home invasion and police responded.

Now she’s on a leave of absence for the rest of the semester and will not be returning in the fall, the school said in a statement early Saturday morning.

“Cypress College takes great pride in fostering a learning environment for students where ideas and opinions are exchanged as a vital piece of the educational journey,” the school said in a statement. “Our community fully embraces this culture; students often defend one another’s rights to express themselves freely, even when opinions differ. Any efforts to suppress free and respectful expression on our campus will not be tolerated.”

The arrogant educator told 19-year-old student Braden Ellis, a business major, that police were created in the American South to track down runaway slaves and suggested that policing is inherently a form of systemic racism, according to the video posted on Twitter (see below).

“I pray for the success of Cypress College, but we need to root out this liberal ideology that’s tearing our country apart,” Ellis told Fox News Saturday after the school’s announcement. “Always do it with gentleness and respect, but Republicans, conservatives, Christians and independent thinkers need to fight back and defend our country’s values.”

Video of the exchange shows his calm response to the teacher’s aggressive line of questioning and attempt to derail his arguments against cancel culture and antipolice sentiment.

WATCH: A student at Cypress College in California was berated by his professor for arguing that police are heroes and belong on children's shows. pic.twitter.com/FSu4J2YxwK

The video begins with the professor responding to Ellis’ arguments, noting, “A lot of police officers have committed an atrocious crime and have gotten away with it and have never been convicted.”

“People that do bad things should be brought to justice,” Ellis responds. “I agree with that.”

The presentation itself is not seen in the video, but Ellis said he argued against “cancel culture” and mentioned several controversies involving TV shows and the police as part of an assignment for a communications class he is taking to fulfill a graduation requirement.

“They got canned off of TV,” Ellis told Fox News Friday. “I brought that up.”

Despite the fiasco, Ellis declined to identify the teacher by name and said she deserved to maintain at least some privacy.

“I pray for her continued success in her career,” the mature young man said Saturday, after the school’s announcement. “Our country needs unity and bad. Keep praying for America.”