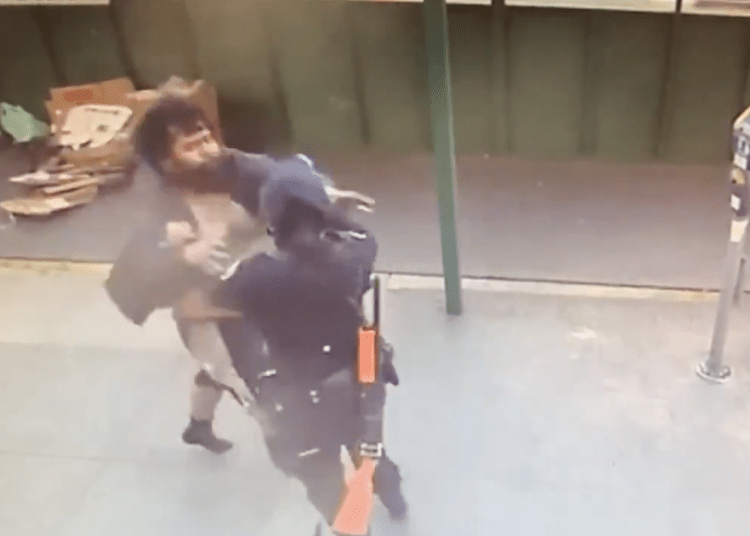 SAN FRANCISCO — A group of bystanders came to the aid of a San Francisco police officer on Friday as she was attacked in the city’s Chinatown area, according to reports.

The officer was responding to a call about a man making racially motivated threats. She was then attacked by the individual as she initiated contact. Gerardo Contreras, 33, was identified as the attacker, ABC 7 News reported. It was unclear if the officer, who is of Asian descent, was attacked due to her race, profession, or another reason.

Surveillance video shows the officer arriving and providing the individual with directions. Initially, he appears compliant, but then things change. She asked him if he had any weapons in his possession—a standard question prior to a cursory pat down—and the man becomes violent.

1/2: Surveillance video captures man attacking @SFPD officer as she tries to see why he was allegedly ranting at Asian people near Clay & Kearny. Bystanders helped pull him off her until backup arrived. 📹: Asian Dawn. https://t.co/1ytjEWDvDF pic.twitter.com/Y1pmRH3H48

The suspect appears to overpower the officer and wrestles her to the ground. Fortunately, bystanders come to her aid as they rush in to assist with the combative subject, Fox News reported.

“He’s a big guy, he was not letting go. He had a death grip on her. And he was not letting go,” says Michael Waldorf, who had just finished eating dinner with his family when he jumped in to help, according to ABC 7. “I saw it as an emergency. She needed our help and she needed it right away.”

With the assistance of several bystanders, the officer was able to regain control and backup officers quickly arrived on scene.

The unidentified officer suffered a bloody nose and minor injuries, ABC 7 reported. Police have yet to say whether it will be viewed as a hate crime as the investigation continues.

The San Francisco Police Officers Association tweeted their appreciation for the bystanders who jumped in to help the officer.

“We’ve seen a rise in violent attacks by homeless individuals, including attacks on police officers,” the association wrote. “We are deeply grateful to these citizens who rushed to our officer’s aide. Our staffing shortage left this officer working alone instead of with a partner.”

Community activist Max Leong commented on the suspect, according to Fox.

“He’s been kind of a fixture here in San Francisco Chinatown,” Leong said. “It speaks to the fact more services need to be provided for the mentally ill.”