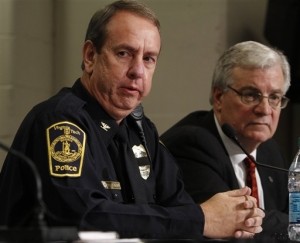 Authorities Search for Suspect in Killing of California City Councilman

Authorities Search for Suspect in Killing of California City Councilman

The Mendocino County Sheriff's Office on Monday told the Santa Rosa Press Democrat (http://bit.ly/nxrOGT ) it believes the picture is of Aaron Bassler, for whom authorities have been scouring area forests since the shootings in August.

Deputies have been searching a 400-square-mile area for weeks, and have installed 40 cameras to aid their search.

In the photo, Bassler appears to be holding a high-caliber rifle and vandalizing a cabin.

Authorities believe they are closing in on Bassler.