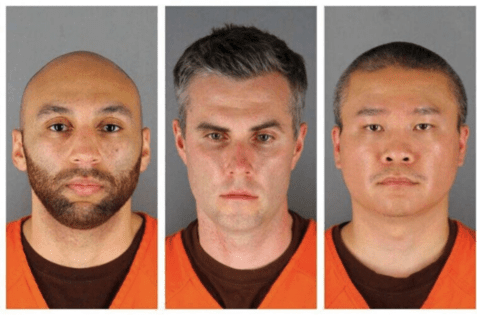 MINNEAPOLIS — The legal teams representing three of the four former Minneapolis police officers charged in George Floyd’s death filed a series of motions this week seeking to have the cases dismissed, accusing prosecutors of leaking information about plea deal negotiations to the press, according to reports. The trial against Derek Chauvin is set to begin on March 8. He is charged with second-degree murder and second-degree manslaughter.

The New York Times, citing three unnamed law enforcement officials, reported for the first time last week that a plea deal was in the works for Chauvin just days after Floyd’s death when violent demonstrations gripped the nation. Under the plea agreement, Chauvin would plead guilty to third-degree murder and face up to 10 years in federal prison, but would avoid federal civil rights charges.

The leaked information will “irreversibly taint the jury pool and will deny Mr. Thao his constitutional right to a fair trial by impartial jurors,” and Ellison, as well as prosecutors Matthew Frank and Neal Katyal should face, “sanctions against the State for its role – directly or indirectly – in the leaking of highly prejudicial information related to potential plea agreements of codefendants,” the motion said, according to Twin Cities Pioneer Press, which obtained the document after it was made public Tuesday.

As a result, the motion asked Judge Peter Cahill to schedule a hearing on the matter within a week.

Moreover, in a second motion filed in Hennepin County District Court late Tuesday, Kueng’s attorney, Thomas Plunkett, also argued that the article published by the Times included leaked information that could have only come from the prosecution team and that their alleged mishandling of the discovery process, “shows a complete disrespect for this Court and the fundamental notions of due process.”

“The history of this case shows purposeful actions to thwart justice for the officers. One discovery violation is an honest mistake, this wide river of flagrant discovery violations is a purposeful act designed to prevent Mr. Kueng and the Codefendant’s from receiving a fair trial,” Plunkett wrote in the motion. “Leaking prejudicial information mere days before trial is loathsome and underhanded. The State’s conduct has been pervasive, malicious and an affront to the dignity of the Office of the Attorney General.”

The attorneys filed these motions as leaders from Minneapolis and local and state law enforcement agencies have been beefing up security plans, preparing to close streets and making sure businesses and residents are well informed as the trial against Chauvin approaches.

State Patrol Col. Matt Langer said authorities will be working to protect everyone’s rights to peacefully protest while also ensuring that businesses, government buildings and infrastructure are protected. Law enforcement will use quick reaction teams, bicycle rapid response officers, SWAT officers and other tactics to respond quickly to emergencies. Protests on freeways or unlawful behavior such as throwing objects, using illegal fireworks, setting fires or damaging property will not be tolerated, Langer said.