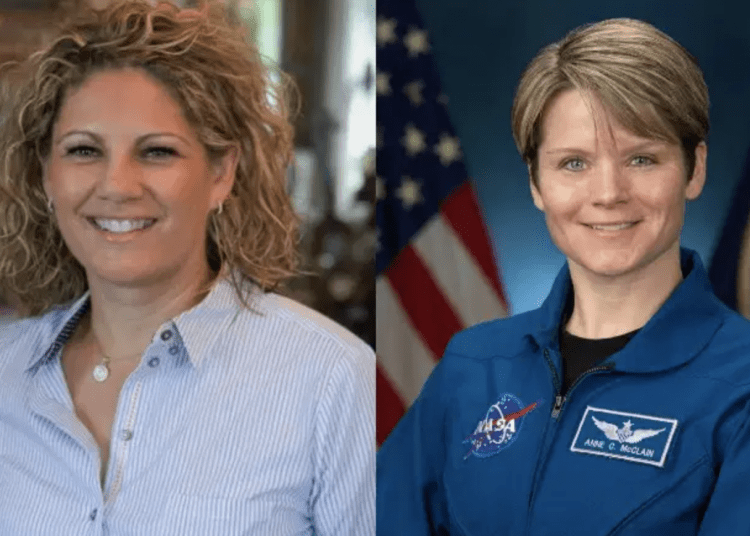 Summer Worden, left, whose claim would have possibly been the first accusation of a crime committed in space, made false statements to NASA's Office of the Inspector General and the Federal Trade Commission regarding her estranged spouse, Anne McClain, right, according a statement from U.S. Attorney Ryan Patrick. (LinkedIn/NASA)

HOUSTON – The estranged wife of a NASA astronaut who claimed her spouse improperly accessed her bank account from space has been indicted on charges of lying to federal authorities.

Former Air Force intelligence officer Summer Worden, 44, from Kansas, has been involved in a bitter divorce with astronaut Anne McClain since 2018. However, the battle intensified after Worden filed a complaint with the Federal Trade Commission and NASA’s Office of Inspector General accusing her spouse of assuming her identity and gaining improper access to her private financial records while orbiting the earth in 2019, Law Officer reported last summer.

Worden’s claim would have possibly been the first accusation of a crime committed in space. However, she made false statements to Office of the Inspector General and the Federal Trade Commission, according a statement from U.S. Attorney Ryan Patrick. As a result, a federal jury in Houston returned the two-count indictment in late February, but it was unsealed Monday, USA Today reported.

Worden married Anne McClain, a decorated astronaut who was once set to be part of NASA’s first all-female spacewalk, in 2014 and filed for divorce in 2018.

In the 2019 identity theft complaint filed by Worden, she saw no signs anyone had moved or used funds in the account, The New York Times reported. Worden’s parents brought a separate complaint to NASA’s Office of the Inspector General that described a “highly calculated and manipulative campaign” designed to win custody of the couple’s child.

“There’s unequivocally no truth to these claims. We’ve been going through a painful, personal separation that’s now unfortunately in the media,” McClain said in a statement released on Twitter at the time. “I appreciate the outpouring of support and will reserve comment until after the investigation. I have total confidence in the IG process.”

There’s unequivocally no truth to these claims. We’ve been going through a painful, personal separation that’s now unfortunately in the media. I appreciate the outpouring of support and will reserve comment until after the investigation. I have total confidence in the IG process.

Through her lawyer, Rusty Hardin, McClain told The Times she had accessed the account but said she did so to ensure that the family’s finances were in order and that there was enough money in the account to care for their child, who was born a year before they met. She said she was never told to stop using the account and continued to use the same password she had throughout the relationship.

Moreover, the indictment says Worden maintained multiple accounts at USAA Federal Savings Bank and she shared access to those accounts “with a commissioned officer in the U.S. Army on detail to NASA’s Johnson Space Center.”

According to the indictment, she lied about when she opened the account that had allegedly been improperly accessed and when she reset her login credentials in a complaint filed with the FTC on March 19, 2019. Furthermore, Worden allegedly made another false statement in an interview with NASA’s Office of the Inspector General in July.

Worden told The Times she mistakenly gave investigators the wrong date of her bank account’s opening but gave the correct information later.

She added that she had intended to change her password when she created the new account and did not believe it was appropriate for McClain to access her finances during a parenting dispute and divorce.

If convicted, Worden could face up to five years in prison on each count and a maximum fine of $250,000. She is expected to make an initial court appearance April 13.

NASA officials said they were unaware of any crimes committed on the space station, prior to this allegation, which prosecutors have now determined to be false.