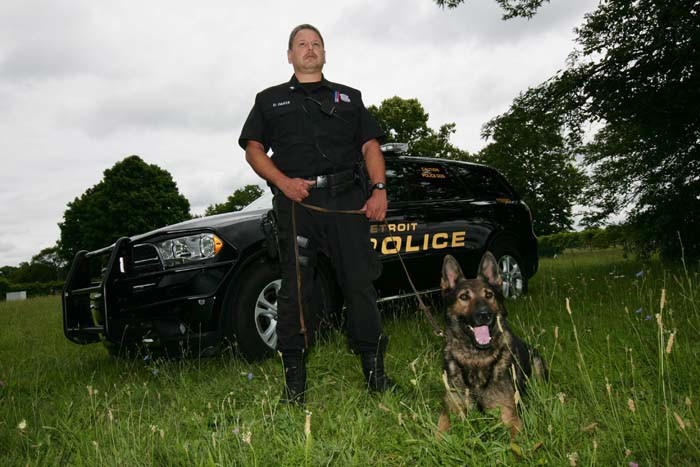 Let’s say you’re in the midst of a vehicle pursuit and the driver gets out and runs. You exit your patrol vehicle and now you start a foot pursuit. You watch the suspect round a corner of a house, and when you get there he is gone. Thankfully, your K-9 officer is on the way. Here is what they want you to do in the time it takes for them to get there:

While you are waiting for K-9 and backup, try to listen and see if you can hear the suspect jumping fences or pushing through bushes or trees. Start telling backup officers where to set up the perimeter.

When the K-9 handler gets their K-9 partner out, ask if you can back them up. Always give the K-9 at least six to eight feet distance from you. The K-9 handler will be busy handling the dog and looking for the suspect and you don’t want them worrying about where you are. If you ask to go with a K-9 handler you need to keep up with them. You are his/her backup, so be right behind him/her. Don’t lag behind.

K-9s are locating tools and search with their noises, eyes and ears. Keep talking to a minimum. Only communicate threats to the K-9 handler. The K-9 handler might ask you questions about the area where they are searching if they are not familiar with it. Try to inform them of any dangers or rough terrain in the area. If during the search you see the suspect before the K-9 handler, get the K-9 handler’s attention but don’t start yelling or giving commands to the suspect without telling the K-9 handler first. It is important that you both understand where the suspect is so you can give commands from a position of cover. I tell my backup guys to simply say, “This track is BS.” I know when I hear those words that I need to immediately stop and look for direction from my backup. Let the K-9 handler give the verbal warnings for the suspect to surrender. If the suspect surrenders you will be directed by the K-9 handler to move up and place the suspect into custody. Most times, the suspect, knowing a K-9 is there, will surrender.

So You Want To Be a K-9 Handler

When I started working in law enforcement I realized early that I wanted to be a K-9 handler. I knew some of the officers in the unit and they were all squared away. I asked some of them what I needed to do to get into the unit and they told me that I had to be a self-starter and not be afraid to get into the middle of some really bad things. They also told me that I had to be a solid officer and have a reputation for doing things right. I took what they told me, worked hard and after five years I reached my goal.

If you want to be in the K-9 unit, you can, but you have to be good and know your stuff. Officers on the street look toward K-9 handlers as leaders during stressful situations and expect nothing less than a positive outcome, as they should. We train more, shoot more and expect a lot out of ourselves and others in the unit. There’s nothing wrong if you don’t make it the first time you try out; keep trying. It’s just like anything in life, if you set your mind to it, you can do and be anything you want. These tips may help you get into the K-9 unit.

K-9 officers like those who are proactive and want to be around officers who kick stuff up. When you work hard on the street and kick up wanted felons and stolen cars, K-9 officers are going to notice and remember who you are.

If K-9 needs a backup to go with them on a track or search for a suspect, volunteer to go. I work for a large metropolitan police department and our policy is to always take a backup with us. If you are going to be the backup, remember to keep up. One of my greatest frustrations is when I’m on a search and I turn around and my backup is three houses behind me.

Maintaining a high fitness level can only help you. When a K-9 spot becomes available, you want to be in shape, so stay fit.

Read up and learn your department’s policy on K-9. Knowing policy only makes you a better cop, so why not memorize the K-9 policy. This will help you later on during the K-9 testing process, too. By backing up K-9 handlers and volunteering for training this will also help in your knowledge of the unit and how it operates.