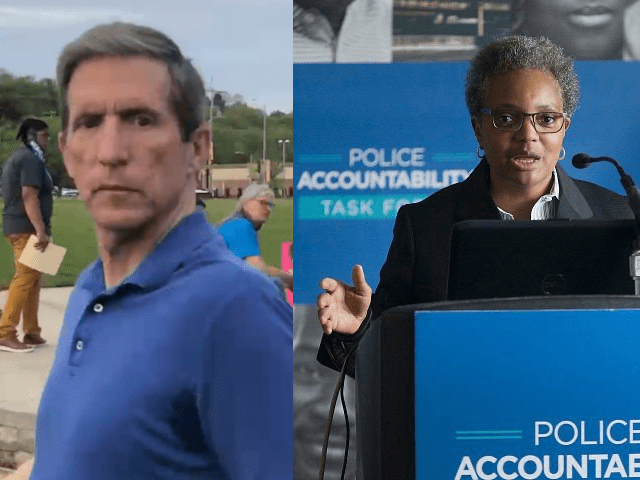 Wauwatosa, Wis. — It seems big cities like Chicago are not the only places with racist mayors. A Facebook Live video from Wauwatosa, a suburb of Milwaukee, shows Mayor Dennis McBride telling a citizen to “go to hell” and calling her and the rest of America “racist.” Strangely, Mayor McBride, who is white, told the white citizen that she is “part of the problem.”

In the past week alone, political “leaders” like Mayor Dennis McBride and Chicago Mayor Lori Lightfoot have let their obsessions with racial politics distort their leadership—and distort the very meaning of “public service.” And even more unbelievable, especially in this era of never-ending demands for police accountability, it seems those demanding accountability desperately need this sobering reminder: “public service” is about political leaders serving the public—not the public serving its political leaders.

Just to be clear, as a so-called political leader, the public does not serve you or your woke supremacist ideologies; you are supposed to serve the public no matter who they are or what they think. It’s that simple.

Indeed, Mayor McBride—as a public servant—you don’t get to walk away without taking responsibility and accountability for calling citizens and the rest of America “racist” or telling a citizen to “go to hell.”

And sorry Mayor Lightfoot, as a so-called leader and champion of “accountability” yourself, you don’t get to pick and choose the skin color of journalists with prejudice—without accepting accountability, or having to apologize for practicing the very kind of racism you claim to be against.

Well, if mayors can act with racial prejudice—and call out others for their skin complexion, or flat out call citizens “racist” and tell them “to go to hell”—then cops should be able to do the same.

Fortunately, this is just hypothetical since most cops hold themselves to much higher levels of ethics and public service than Mayor McBride, Mayor Lightfoot, and other “woke supremacist” political leaders. Obviously, they cannot keep their own emotions in check, let alone deal with bigger, more important issues.

However, the higher standards to which law enforcement professionals hold themselves should never be an alibi for the failings of the political leaders who claim to support them.

Both Mayor McBride and Mayor Lightfoot have had plenty of problems with police officers and police unions in their respective cities. In the past week alone, Law Officer has pointed out how McBride insulted an officer just last week during a radio interview, and how the board of the Chicago FOP just declared “no confidence” in Lightfoot’s leadership and the leadership of the top brass of the Chicago PD.

Mayor McBride, in following your examples of “leadership” and so-called public service, is it now acceptable for cops to call citizens “racist,” or tell them to “go to hell”?

And Mayor Lightfoot, is it now acceptable for Chicago police officers to ignore speaking to citizens and the members of the press because they don’t have the same color skin?

And please assume accountability for your words and actions.

Or please stop the hypocrisy and resign—on behalf of the police officers of Wauwatosa and Chicago and the citizens they protect and serve (unlike you do).