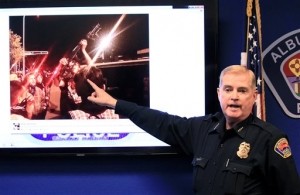 ALBUQUERQUE, New Mexico (AP) — A day after hundreds of people clashed with Albuquerque riot officers during a protest over police shootings, the city's new police chief on Monday commended officers for showing restraint and said he is about to unveil reforms that include changes to the embattled department's recruiting process.

Police Chief Gordon Eden spoke to reporters after more than 300 people took to the streets Sunday, calling for him and other city officials to resign. The protest turned violent that evening, when people began hunting down officers, throwing rocks and bottles, and spitting on officers, he said.

The chief says officials decided to disperse the crowd with tear gas after a man pulled out an AK-47, others blocked traffic by lying down on Interstate 25 and unruly crowds trapped people and officers in cars. Protesters also started attacking each other, impeded emergency crews and blocked the entrance to a hospital.

There was only one minor injury, an officer who hurt his knee, Eden said. Four protesters were arrested during the 12-hour demonstration.

Sunday's protest and another last week were in response to the 37 shootings Albuquerque police have been involved in since 2010, 23 of them fatal, including the recent case of a homeless camper killed after he appeared to be surrendering to police. By comparison, police in the similarly sized cities of Denver and Oakland have been involved in fatal and non-fatal shootings totaling 27 and 23, respectively.

The U.S. Justice Department has been investigating the Albuquerque department for more than a year, looking into complaints of civil rights violations and allegations of excessive use of force.

Eden, who has been on the job for a month, says he is working on reforming the department's recruiting process. He says a "new recruiting philosophy" will be announced by early next week. An independent review of the department's shootings nearly two years ago cited issues with officers being unable to de-escalate situations. It called for better screening to find candidates with problem-solving skills.

Mayor Richard Berry said police have been working to find ways to quell run-ins with suspects and transparency has improved with the use of lapel cameras.

A protester, Alexander Siderits, 23, said Sunday that he was participating because he was "fed up" with how police treat citizens.

"It has reached a boiling point," Siderits said, "and people just can't take it anymore."

Gov. Susana Martinez said Monday that she understands the public's frustration but called on residents to remain calm while federal officials investigate.

Eden said the Sunday protest began peacefully near police headquarters. But then the crowd moved toward the University of New Mexico and became a "lawless" and "very angry mob."

He said protesters began hunting down officers who were staged remotely in case of emergency.

"The crowd completely changed its mood, its tone," said Eden. "It went from peaceful to a mob so mad that … protesters said they were being harmed by other people in the group."

The protest was fueled by outrage over the March 16 shooting death of homeless camper James Boyd after a standoff. Ten days later, officers killed another man after they say he shot at them.

On Friday, the FBI confirmed it had opened a criminal investigation into the Boyd shooting.

The mayor's office has received calls from outraged people, and Berry said city websites were subject to a "robust" cyberattack.

A YouTube video emerged last week threatening retaliation for Boyd's death. The video, which bore the logo of the computer hacking collective Anonymous, warned of a cyberattack on city websites and called for the protest. Albuquerque police said their site had been breached early Sunday afternoon, but it was back online by that evening.

Associated Press writers Russell Contreras in Albuquerque, Terry Collins in Oakland and Sadie Gurman in Denver contributed to this report.