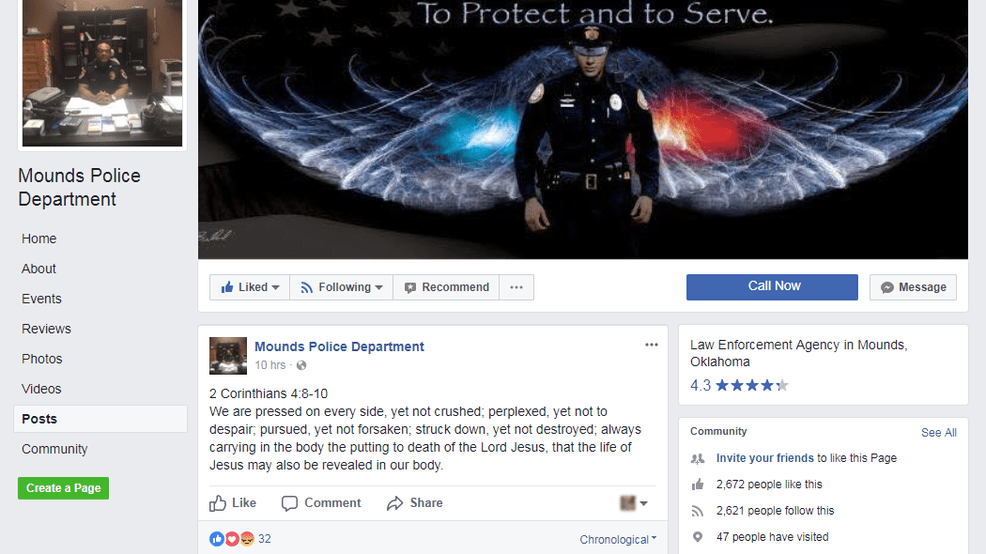 Facebook posts by the Mounds (OK) Police Department have the ACLU of Oklahoma alleging Constitutional violations.

On Wednesday, the ACLU of Oklahoma sent a letter to Mounds Mayor Rosa Jackson and Police Chief Antonio Porter saying the use of an official Facebook page is direct advocacy of the Christian religion. Citing the Establishment Clause of the First Amendment, the group says the religious posts are inappropriate and unconstitutional.

“Both the First Amendment of the United States Constitution and provisions of the Oklahoma Constitution protect against government officials establishing a state religion,” said Brady Henderson, ACLU of Oklahoma legal director. “The exclusive, pervasive promotion of the Christian faith by the Mounds Police Department represents a clear violation of those legal mandates. By promoting one specific religion on its official Facebook page, the Mounds Police Department has established clear preference for that faith above other faiths and above no religious faith at all. This kind of government interference with our religious freedom is simply not permissible under United States or Oklahoma law.”

Henderson questions whether the Mounds Police Department will protect citizens of other faiths.

Mounds Police Chief Antonio Porter, a pastor and former Oklahoma Highway Patrol Officer says he is not worried about the ACLU and simply wants to “encourage” others.

Share and speak up for justice, law & order...
Tags: lawLegalreligion