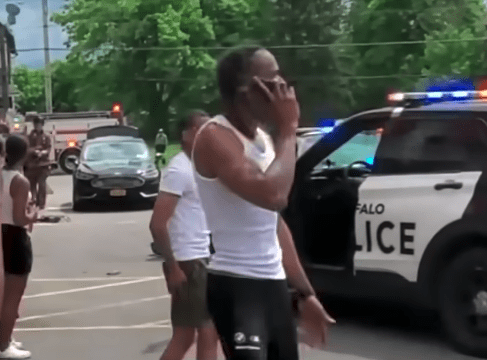 BUFFALO, N.Y. – A Buffalo 911 dispatcher accused of shouting at and hanging up on a supermarket employee who was hiding during last month’s racially motivated mass shooting has been terminated, according to a reports.

The unnamed dispatcher was fired on Thursday, the Erie County Department of Personnel told CNN. The 911 dispatcher had been on paid administrative leave since May 16 and was fired after a May 30 hearing, according to County Executive Mark Poloncarz.

The dispatcher’s union, the Civil Service Employees Association, said Thursday it had ensured that disciplinary due process provisions were “followed fairly and appropriately here,” KTLA reported.

The dispatcher told The Buffalo News late last month she was sorry about what the caller went through during the shooting.

BUFFALO, N.Y. – A 911 dispatcher faces termination as the emergency call-taker is accused of shouting at and hanging up on a worker who was hiding at the Buffalo supermarket during Saturday’s massacre.

The unidentified Erie County dispatcher was placed on administrative leave and could be fired, officials confirmed, according to the Daily Wire.

The dispatcher shouted at the female employee and demanded to know why she was “whispering,” before hanging up, the worker told The Buffalo News. The emergency request for help was taking place as the suspect was in the process of gunning down 13 people, killing 10 at the Tops Friendly Market.

The dispatcher allegedly shouted at a whispering supermarket employee who called 911 and hung up on her. https://t.co/aDpOuq2ukQ

“She was yelling at me, saying, ‘Why are you whispering? You don’t have to whisper,’” the employee, identified as Latisha, an assistant office manager at the market, told the newspaper. “And I was telling her, ‘Ma’am, he’s still in the store. He’s shooting. I’m scared for my life. I don’t want him to hear me. Can you please send help?’ She got mad at me, hung up in my face.”

The assistant manager told the news outlet she had to phone her boyfriend and have him call 911 to report the shooting rampage. It is not yet clear who first disconnected the call.

“I felt that lady left me to die yesterday,” Latisha told The Buffalo News.

According to Peter Anderson, a spokesperson for Erie County Executive Mark Poloncarz, “Termination will be sought.”

The dispatcher has a disciplinary hearing scheduled for May 30.