$27 million does not change the facts

And it's time to accept the facts about the George Floyd overdose... 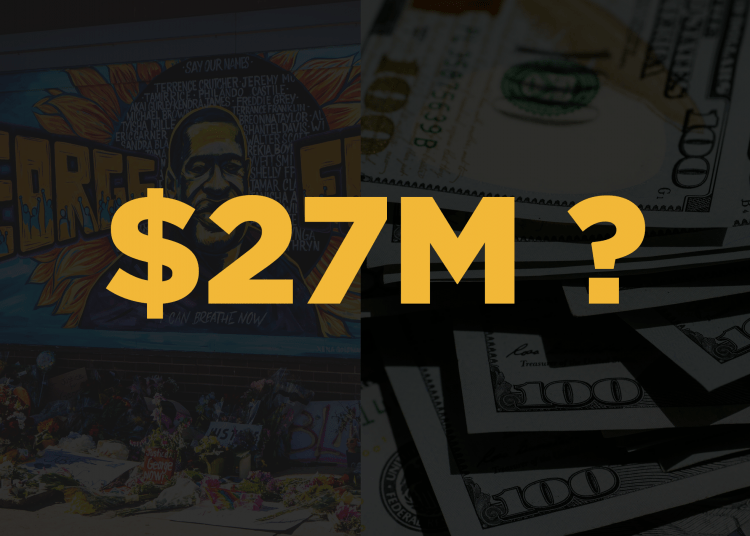 Minneapolis, Minn. — Today’s settlement of 27 million dollars by the city of Minneapolis to the family of George Floyd should not be surprising. But the timing of the announcement—and what it attempts to compensate for—should concern every American. Don’t get me wrong, I feel bad for George Floyd’s family. But does anyone want to live in a society where poor choices, criminal behavior, and drug use are rewarded?

If this lawsuit was against the mayor or the leadership in Minneapolis—who by their own actions, created one of the the most violent communities on the planet with their cowardice and lies—I could almost understand it. And if the lawsuit alleged that the Minneapolis Police Department implemented the policy and training that officers used in the incident—and and it was factually proven that those policies and training were inherently dangerous and deadly—I could understand that too.

But the lawsuit alleges that Floyd’s civil rights were violated when he was restrained, along with other allegations. As we all ponder the enormous payday that was just awarded to the Floyd family, let’s step back and consider the facts for a moment—especially since there are some facts here that seem to have been completely ignored.

And let’s ask some basic questions, to make sure these were considered in granting an enormous sum. Therefore, did the huge, virtue-signaling payout of citizen tax dollars consider whether:

The incident began because a victim called police to report that George Floyd committed a felony crime?

George Floyd overdosed on illegal methamphetamine and fentanyl—and enough of it to likely kill a horse, or an ox?

George Floyd would have acted like his passengers and simply followed officers’ requests—during their investigation of a felony crime?

Of course, asking these kinds of questions is a good way to get yourself “cancelled”—especially if you dare mention that George Floyd can be blamed for anything, perhaps ever in his life nowadays. But does anyone with common sense actually believe that George Floyd had nothing to do with his own death?

Returning to the facts, the coroner described the amount of fentanyl in Floyd’s system as a “lethal dose.”

Other officials also documented that if Floyd would have died—anywhere else without a cop around—his death would be “considered an overdose.”

However, in this case, whether unknowingly or in an attempt to swallow drugs to not get caught in possession of illegal, controlled substances—Floyd’s actions prompted someone to call police. And subsequently, the police were present when he began to show symptoms of a drug overdose, or excited delirium, or both.

As practically every video shows, Floyd was agitated and had difficulty speaking coherently and breathing—long before he said that he couldn’t breathe (which is a symptom of various drug overdoses, and other medical emergencies). And rather than simply follow the requests of the investigating officers, like his passengers did, Floyd struggled with officers before being placed in the back of the police car. He then screamed to be placed on the ground because he was claustrophobic.

Noticing Floyd’s distress and symptoms, officers called paramedics based on their training on excited delirium that was given to the officers in 2018. This training and quick action was important because according to PubMed, “It has become increasingly recognized that individuals displaying ExDS (excited delirium) are at high risk for sudden death, and ExDS therefore represents a true medical emergency.”

The officers acted quickly and without hesitation. According to their training and the medical research, they called paramedics, took Floyd out of the car, and subdued him on the ground in an attempt to lower his heart rate. Because Floyd was struggling and fighting, subduing him and keeping him still was their only option.

We know the rest of the story.

How any of this warrants a $27 million dollar payout, is anybody’s guess. And it should be extremely concerning that the same politicians that chose not to tell you the truth about the incident, decided to announce this settlement precisely during juror selection in Officer Chavin’s trial.

Clearly, the timing sends a message to jurors, something like: Chauvin must have been guilty because the family received an astronomical settlement. But even more preposterous is what our sources in Minneapolis told us after the announcement.

Behind closed doors, the politicians needed the decision now to help keep potential rioters from once again destroying the city.

If they have learned by now, appeasing irrational mobs doesn’t suddenly make them more rational, or less violent. Rather than telling the truth and explaining how things may not actually be what they seem, the politicians preferred to cry, hide, and virtue signal to the world.

But let’s not forget, every other politician in every other city that promulgated the lies about “systematic police racism”—instead of explaining the details about police training and drug overdoses—is just as guilty. By using the overdose of George Floyd to systematically change or “reimagine” their view of law enforcement, these pandering politicians have made their own cities more dangerous and undeniably placed the lives of their constituents at a greater risk. But don’t expect them to hold themselves accountable or responsible—they’re too busy scapegoating law enforcement and demanding accountability and “reform” based on something that does not even exist.

What happened in Minneapolis on May 25, 2020, was a tragedy. But to believe that four officers—including two who were minorities themselves, and another married to a minority—decided to collectively murder George Floyd because they were racist while knowingly being recorded is an absurdity that only politicians and mainstream news and social media could make seem believable. And they have.

But let’s not be confused about the most important aspect of this insane settlement: $27 million or $270 million dollars does not change any of the facts about George Floyd’s overdose during a police investigation.

And if you care about this country—and for the future of our country for generations to come—then we better get back to the truth no matter how uncomfortable or inconvenient the facts of the matter may seem.