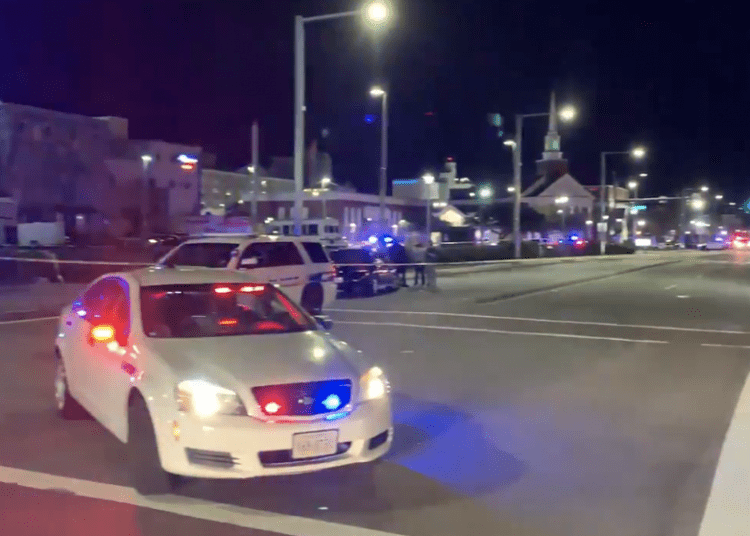 VIRGINIA BEACH, Va. — At least two shootings — one of them involving a police officer — near the Virginia Beach Oceanfront in southeastern Virginia left at least two dead and eight wounded on Friday night, according to police.

One of the deceased was killed by police and the other, a woman, was killed in a separate shooting, according to a statement from the Virginia Beach Police Department.

An officer was also hit by a car but was expected to survive, WVEC-TV Norfolk reporter Ali Weatherton reported.

The eight surviving victims were all transported to hospitals with gunshot wounds ranging from serious to life-threatening, police said.

“What you can see is we have a very chaotic incident, a very chaotic night in the Beach,” police Chief Paul Neudigate said, according to FOX 43 in Virginia Beach. “Many different crime scenes.”

Several people were reportedly in custody, being questioned by police. Police have not said if any arrests have been made, FOX News reported.

VBPD is investigating a shooting involving several victims with possibly life-threatening injuries. Large police presence at the oceanfront between 17th and 22nd St. Please avoid the area at this time. More to follow as it becomes available. @CityofVaBeach

Massive police scene at the #VirginiaBeach oceanfront. Overheard a police officer say, “this is bad.” I am currently waiting for an official release from police. #13NewsNow pic.twitter.com/U4f7e5m82E

The original shooting took place about 11 p.m. at 20th and Atlantic, police said. Officers in the area responded after hearing shots and found the victims suffering from gunshot wounds.

Officers then engaged a man and fatally shot the suspect in an incident “related” to the first shooting, police said.

Police said there’s no suspect information yet in the shooting of the woman as homicide detectives continue to investigate. The officer-involved shooting is also under investigation.

#BREAKING 2 are dead after multiple shootings at the @CityofVaBeach Oceanfront. 1 was shot by a @VBPD officer, another 8 shot in an incident that started outside at 20th and Atlantic. Officer was stuck by car at 20th and Pacific, he’s expected to be okay @WAVY_News pic.twitter.com/JD3XlBnOll

The officer who shot the suspect has been placed on administrative assignment, which is standard procedure, during the investigation. He has been with the department for 5 years.