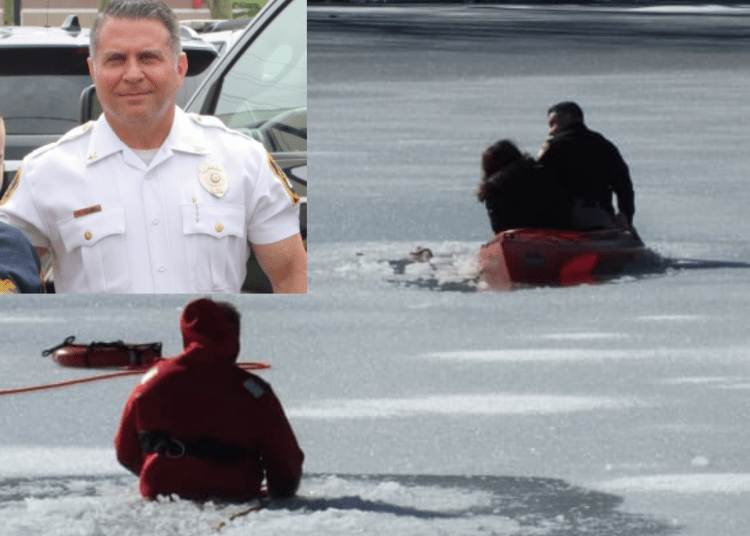 Bergen County, New Jersey – Elmwood Park Police Chief Michael Foligno had a Thursday he will likely never forget. While working at his desk, he heard a call for help at the Passaic River, located just a half mile away.

As he approached the scene, he observed a woman holding a baby in one hand and clinging to the ice with the other.

The woman decided to walk across the ice and broke through half way across.

It is estimated they were in the water for approximately 45 minutes.

Telling NJ.com, Chief Foligno said that he told himself “I can’t sit here and watch people die in front of me…..“I’m either going to help them or die trying. I can’t let them die.”

Foligno grabbed a red, plastic kayak and tossed it into the river. He climbed on face down – almost like he was swimming – and used a shovel as an oar.

It took several minutes to get to the woman, who by now according to Foligno “was in full panic mode.”

The mother was clinging to ice and screaming that she couldn’t hold on to her baby any longer, Foligno said.

An Elmwood Park firefighter in a wet suit was able to get to the kayak and pull the victims and the police chief to shore using a sled and ropes.

The woman and child, who lived a few blocks from the river, were taken to a local hospital and admitted Thursday evening.

Foligno said police had determined the mother and child were “walking on the ice and playing” when they fell through. There were no other people on the ice when the incident occurred, he said.

In a statement, the police department also thanked the people who provided the chief with the kayak “rather than record the incident with their cellphones.”