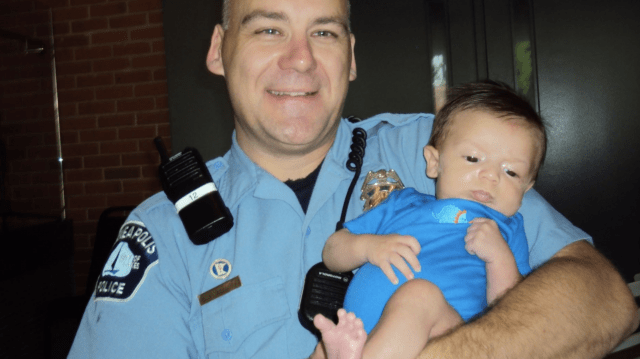 Chris Kelley, who has collected eleven military medals as a 27-year veteran of the U.S. Army and Army Reserves and clocked more than 36,000 hours patrolling the Minnesota streets as a 20-year veteran of the Minneapolis Police Department, has his sights set on usurping Omar from her seat representing Minnesota’s 5th Congressional District in 2020. (Courtesy Chris Kelley)

MINNEAPOLIS – When Rep. Ilhan Omar ignited steep controversy in March describing the September 11 attacks as “some people did something,” it was then that a longtime police officer in her neighborhood decided he needed to do more than just bemoan what he perceived as a shocking trivialization of a terrorist attack that tore through the fabric of his beloved country.

Now, Chris Kelley, who has collected eleven military medals as a 27-year veteran of the U.S. Army and Army Reserves and clocked more than 36,000 hours patrolling the Minnesota streets as a 20-year veteran of the Minneapolis Police Department, has his sights set on knocking Omar from her seat representing Minnesota’s 5th Congressional District in 2020, Fox News reported.

“September 11 was a terrible loss of life, not just for police officers and firefighters and other first responders, but 3,000 people and non-combatants died, and to be dismissive of that was an outrage. I could sit and complain or I could do something about it,” Kelley, who is campaigning as an Independent, told Fox News. “And I believe I can be a positive voice in standing up for people in our country, and for our first responders and the people every day on the frontlines.”

In his estimation, Omar has devoted too much time to crafting her “celebrity” than on being of service to the community. And he knows all about honorable service.

“As former military, I am here to serve and not further my status. I want to do a good job for the people I represent and I don’t have a personal agenda,” noted Kelley, who deployed once during Operation Desert Storm and twice during Operation Iraqi Freedom as an intelligence analyst and also holds a master’s degree in criminal justice leadership from Concordia University in St. Paul. “I’m passionate about service and I just want to be able to continue that.”

Kelley is not a complete political rookie. He campaigned for the Republican Senate endorsement in 2016. Although he was unsuccessful, it gave the 49-year-old a taste for what Minnesotans wanted and needed.

“Immigration is a big issue right now. I believe in having a secure border; if you don’t have a country you don’t have a border and our border agents are doing a great job, but they are being overwhelmed and Congress isn’t giving them the tools they need,” he said. “But I would also like to see a pathway to citizenship for those under DACA; they couldn’t help they were brought here and need a shot to be able to stay here.”

Moreover, Kelley stressed that he remains firmly committed to boosting Medicare, while ensuring private health insurance remains available and the costs are driven down. He also supports term limits on representatives of both the House and the Senate, reported Fox News.

Furthermore, as the father of a 5-year-old, he also underscored the importance of addressing the elephant in the room.

“A big concern I have is our national debt, and I would like to work on bringing this down. It should be a priority,” Kelley continued. “I have a 5-year-old and this debt will be in our children’s lap.”

And despite the blatant political differences he has with Omar, the local police officer is vowing to run a “positive, fact-based campaign” that won’t entail attacking or ridiculing his opponent.

“I won’t be bringing in controversy and scandal. I will be bringing firsthand knowledge of the things that I know are going on in the community as an officer. I see a lot every day – the homelessness, the opioid crisis; I want to bring these things to the forefront and put some ideas on the table on how to deal with them,” Kelley added. “I want to do anything I can to make people’s lives better; I just want to sit and listen to people and make some positive change.”