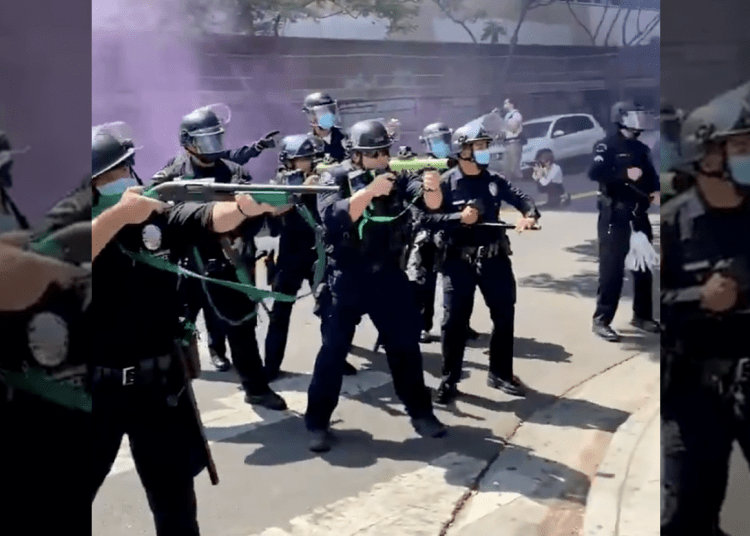 LOS ANGELES — Protesters and counter-protesters descended on Wi Spa in Los Angeles, which became a flashpoint just weeks ago when a customer adamantly complained about a transgender person disrobing in the area reserved for women.

Earlier this month, a viral video showed the woman complaining about the transgender identifying as a female being allowed to disrobe in the women’s section, while exposing male anatomy — a penis — in front of young children, Law Officer reported.

On Saturday, Antifa counter-protesters clashed with LAPD officers near the spa, according to several videos posted on Twitter by independent journalist Brendan Gutenschwager and others.

Police clash with Antifa counter-protesting at the Wi Spa, after several smoke bombs & water bottles were thrown at protesters across the street #WiSpa #LosAngeles pic.twitter.com/fRoXWtmAng

Police push the crowd of counter-protesters away from the Wi Spa, giving orders to leave the area after declaring an unlawful assembly #WiSpa #LosAngeles pic.twitter.com/00TGQW8CYa

The videos showed hostilities between non-compliant, violent agitators and police.

WI SPA LA: LAPD Officer OBLITERATES 2 ANTIFA Militants at ONCE with his club after one pulls their mask down to SPIT in the officers FACE

Woman was just shot by a rubber bullet as she asked to please put down your guns— pic.twitter.com/YkZUjW007l

The violence appears to be a planned event. A flyer posted online by the southwest chapter of the Youth Liberation Front, which was described by the Seattle Times as “a persistent militant voice,” encouraged followers to gather at Wi Spa at 10:00 a.m. on Saturday to “SMASH TRANSPHOBIA” and “SMASH FASCISM.”

“ROUND TWO MOTHER F******,” the group tweeted. (As of the time of this publication Twitter has not removed the call to violence.)

Saturday’s event followed the first round of culture war clashes, which occurred on July 3, when rampant fighting took place between protesters and counter-protesters outside the spa in the Koreatown area of Los Angeles, Law Officer reported.

At a protest near Wilshire Bl & Rampart Bl, 2 groups clashed. Smoke bombs/projectiles were thrown at ofcrs & a dispersal order was issued. Several dozen people were arrested. Numerous items in violation of 55.07 LAMC were found discarded including a stungun, knives, pepper spray pic.twitter.com/exk7vvTfRm

Wi Spa responded to the customer complaint by saying that California’s anti-discrimination law protects transgender individuals, but it does not tolerate lewd conduct by anyone.

“As a spa located in Los Angeles, Wi Spa complies with California law prohibiting discrimination by a business, including the Civil Code provision set forth above,” the spa said in a statement. “Like many other metropolitan areas, Los Angeles contains a transgender population, some of whom enjoy visiting a spa. Wi Spa strives to meet the needs and safety of all of its customers, and does not tolerate harassment or lewd conduct by any customer, regardless of their sex, gender, or other characteristic.”

The ongoing problem is that most people consider a penis being exposed in a women’s bathroom or locker room as lewd, but transgender individuals are making inroads to erase these historically held beliefs.