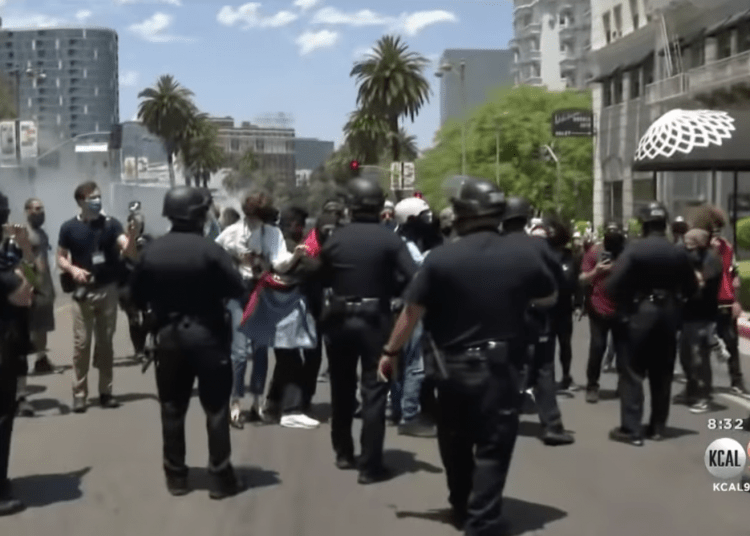 LOS ANGELES — Violence erupted during tense protests Saturday outside a Los Angeles spa where a transgender customer reportedly exposed male anatomy to children, teens and adults in the women’s area a week earlier.

A viral video showed a woman complaining (see video below) about a transgender identifying as a female being allowed to disrobe in the women’s section, while exposing male anatomy — a penis — in front of young children, according to reports.

The angry customer posted the clip on Instagram under the username Cubana Angel after the exposure last weekend at the Wi Spa, 2700 Wilshire Blvd., in the Koreatown neighborhood of Los Angeles, CBS Los Angeles reported.

The dialogue between the woman and employee working the counter was filled with tension.

“So, it’s OK for a man to go into the women’s section, show his penis around the other women, young little girls — underage — in your spa? Wi Spa condones that, is that what you’re saying?” the woman asks the employee.

“He is a man. He is not a female. There are girls down there, other women who are highly offended by what they just saw and you did nothing. You sided with him,” the woman says with blistering emphasis.

A male customer then tries to defend the trans person, who is not seen in the footage, New York Post reported.

While this is happening, a female customer at the other end of the counter is asking to have her money refunded.

Groups showed up Saturday in support of the woman who complained about the incident at Wi Spa, but so did opposition, CBS Los Angeles reported.

The protests soon devolved into violence, with footage from the scene showing trans-rights supporters assaulting protesters from the other side, spraying them with an unidentified substance, pushing them, hitting them and demanding that they leave.

Several of the trans-rights supporters could be heard profanely shouting at the protesters to “get the f—- out!”

At one point during the civil unrest, a dumpster had been dragged into the middle of the street, with its contents burning. When officers in riot gear arrived, the smoke could be seen billowing behind them as they tried to restore order, Fox News reported.

Nevertheless, some of the agitators who reportedly ignited the fire, aggressively shouted in the faces of police in tactical gear.

LAPD declared an unlawful assembly about 12:30 p.m. and regained control of the area a short time later.

Meanwhile, the spa defended its policy in a statement to Fox LA, saying that California law “prohibits discrimination against transgender and gender non-conforming people.”

“As a spa located in Los Angeles, Wi Spa complies with California law prohibiting discrimination by a business, including the Civil Code provision set forth above. Like many other metropolitan areas, Los Angeles contains a transgender population, some of whom enjoy visiting a spa,” it said.

“Wi Spa strives to meet the needs and safety of all of its customers, and does not tolerate harassment or lewd conduct by any customer, regardless of their sex, gender, or other characteristic,” the statement added.

Therefore, according to Wi Spa (and California law), the safety of ALL customers, including non-consenting women and underage girls, requires exposure to a male’s penis in the private women’s section of the business. Furthermore, as demonstrated by this incident, the law may not consider the exposure of male genitals to an underage girl as harassment, but most parents will.

“Acceptance of people should never be mistaken for affirming a lifestyle that is non-conforming to societal standards,” said an unnamed protester.