The video clips offer still more evidence that Ellison, who is running for reelection as Minnesota attorney general, has been genuinely "anti-cop" in his rhetoric and actions going back decades. 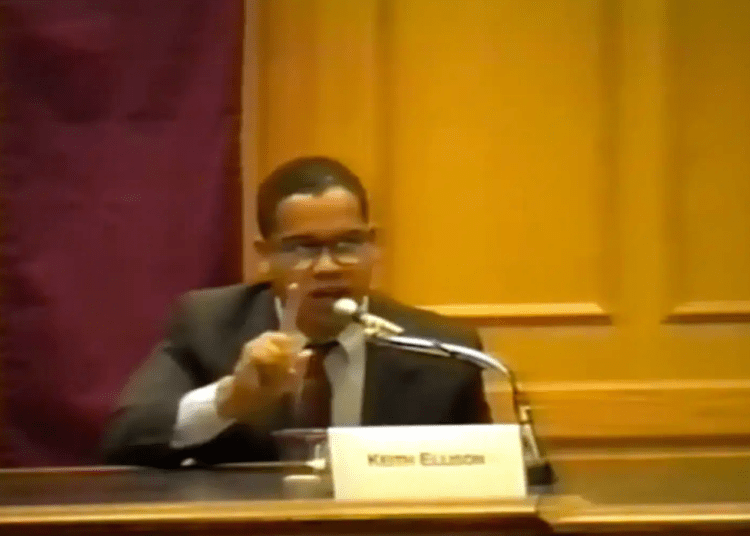 Video from the mid-1990s has surfaced showing Keith Ellison doubting the legal culpability of a convicted cop killer.

Working as an attorney at the time, Ellison claimed the death penalty was one of several “racially biased” institutions that disproportionately affect black Americans and “oppressed nationalities.”

He cited the example of Mumia Abu-Jamal, a black man who was sentenced to death in 1982 for the first-degree murder of Philadelphia police officer Daniel Faulkner.

Despite the guilty conviction, Ellison claimed without evidence that Abu-Jamal was “very likely innocent” of the crime.

Although Abu-Jamal’s death sentence was reversed in 2011, he is now serving life imprisonment without the possibility of parole.

In that same forum, Ellison argued that environmental crimes are worse than street crimes and urged white people to take “responsibility for racial oppression.”

“In my view, we can start by white people in America taking responsibility for racial oppression as opposed to every young person I meet saying, ‘Oh, I never owned slaves. Not me.’ We can start there and we can move on to reparations,” he said.

Ellison also claimed “black people should have the right to secede from America if they want to,” reflecting the ideas he promoted in a Minnesota Daily column in law school. In that column, he called for voluntary racial separation of American whites and blacks, with separated blacks in their own “black state.”

“Black-white interaction would be voluntary instead of compelled. No more busing, no more affirmative action and, best of all, no more white guilt,” he wrote.

Johnson released clips from two other panels Ellison participated in during the early ‘90s.

In one, Ellison referred to police as the “military wing of the government” and defended former Vice Lords gang leader Sharif Willis, who was implicated but never charged in the execution of former Minneapolis police officer Jerry Haaf.

Ellison denounced the raid on Willis’s home as an abuse of power on the part of the Police Officers Federation of Minneapolis.

“In the aftermath of the Haaf killing, guess what happened? They did a raid on a man’s house. They’ve scurrilized [sic] Sharif Willis’s name all over town. They’ve talked about him like a dog,” Ellison said.

“They raided his house. They didn’t tell the chief, or the deputy chief who has been trying to bridge the gap between so-called ‘gangs’ and the police,” he added. “They just did it, and told them after they did it.”

Two people, including one of Haaf’s killers, testified at trial that Willis “ordered and planned” the murder, according to the Pioneer Press. Willis’s nephew was sent to prison for his role as a getaway driver. Willis denied any involvement in a 2019 interview with the Star Tribune.

In other clips, Ellison called for “raising the debate” on public safety and, as he did in other cases, lamented the “hysteria” around crime.

“On this question of crime and crime hysteria, the debate has been lacking. It seems like all the debate centers around, do we punish these quote unquote criminals severely or very severely,” he said.

The video clips offer still more evidence that Ellison, who is running for reelection as Minnesota attorney general, has been genuinely “anti-cop” in his rhetoric and actions going back decades.

Alpha News reached out to Ellison’s campaign for comment but did not receive a response.