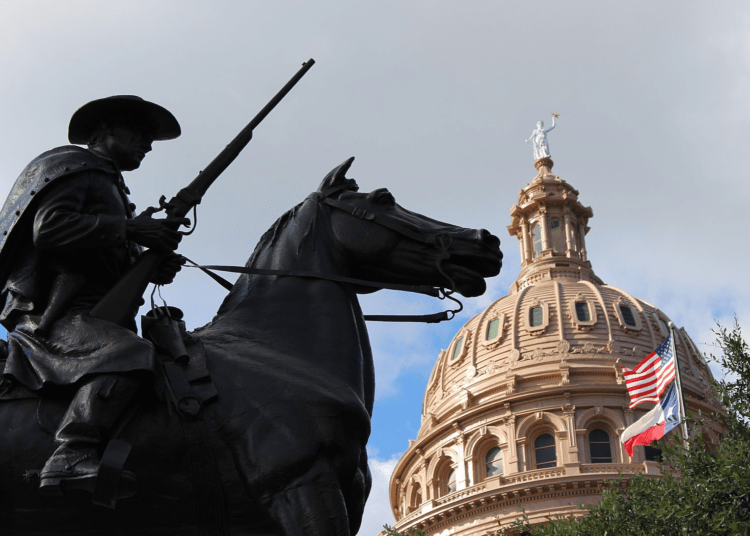 A photograph of the Texas Rangers monument with the Texas State Capitol dome in the background. (Clarissa Simmons - Wikipedia Commons)

WACO, Texas – On this day in history, October 17, 1835, the Texas Rangers, a widely respectable state law-enforcement agency that enjoys a legendary image in American culture, was formally proposed.

Officially known today as the Texas Ranger Division of the state Department of Public Safety, it derives its name from its original mission of “ranging” across the frontier to protect early settlers and inhabitants.

The Rangers are deeply integrated in the proud, and sometimes larger than life, Texas history, culture and identity, Fox News reported.

“The Rangers are part of the history and mythology of the Old West,” according to the Texas Ranger Hall of Fame and Museum in Waco. They say the Rangers are the oldest state law-enforcement agency in North America.

“No man in the wrong can stand up against a fellow that’s in the right and keeps on comin’.”

The law enforcement organization traces its origin and roots to the “Father of Texas” Stephen A. Austin. He led the state’s earliest Anglo-European settlements in 1821, and then inspired the new Texans’ eventual fight for independence from Mexico. The state capitol was also named after the fearless leader.

“There was no regular army to protect [settlers], so Austin called the citizens together and organized a group to provide the needed protection,” writes the Texas DPS.

“Austin first referred to this group as the Rangers in 1823, for their duties compelled them to range over the entire country, thus giving rise to the service known as the Texas Rangers.”

One of the most notable investigations in organizational lore occurred when Texas Ranger Frank Hamer led the law enforcement posse that gunned down Depression-era gangsters and Texas natives Bonnie Parker and Clyde Barrow in Louisiana in 1934.

Although the Rangers remain few in numbers, they continue to “range” across the massive Lone Star State.

The agency maintains a staffing of 162 commissioned Rangers assisted by 60 full-time support personnel, according to the Texas Rangers Association Foundation.