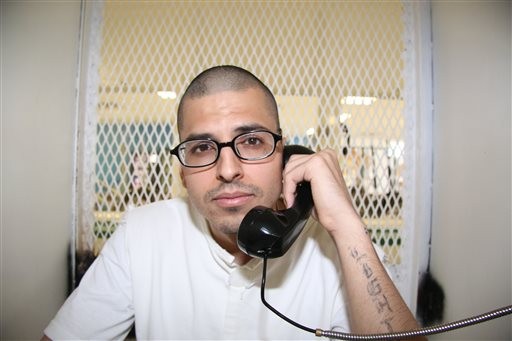 HUNTSVILLE, Texas (AP) — Texas inmate Daniel Lee Lopez got his wish Wednesday when he was executed for striking and killing a police lieutenant with an SUV during a chase more than six years ago.

The lethal injection was carried out after the U.S. Supreme Court rejected appeals from his attorneys, who disregarded Lopez's desire to die and disagreed with lower court rulings that found Lopez was competent to make that decision.

"I hope this execution helps my family and also the victim's family," said Lopez, who spoke quietly and quickly. "This was never meant to be, sure beyond my power. I can only walk the path before me and make the best of it. I'm sorry for putting you all through this. I am sorry. I love you. I am ready. May we all go to heaven."

As the drugs took effect, he took two deep breaths, then two shallower breaths. Then all movement stopped.

The roar of revving motorcycles on the street outside the Huntsville prison, from a group of bikers supporting police, could be heard as Lopez spoke, along with rumbles of intermittent thunder.

Lopez, 27, became the 10th inmate put to death this year in Texas, which carries out capital punishment more than any other state. Nationally, he was the 19th prisoner to be executed.

Lopez's "obvious and severe mental illness" was responsible for him wanting to use the legal system for suicide, illustrating his "well-documented history of irrational behavior and suicidal tendencies," attorney David Dow, who represented Lopez, had told the high court. Dow also argued the March 2009 crime was not a capital murder because Lopez didn't intend to kill Corpus Christi Lt. Stuart Alexander.

The officer's widow, Vicky Alexander, and four friends who were witnesses with her prayed in the chamber before a physician pronounced Lopez dead. At the same time, some people selected by Lopez as witnesses sang "Amazing Grace" from an adjacent room.

"This has nothing to do with revenge," Vicky Alexander said afterward, and after hugging more than a dozen police officers who stood at attention as she departed the prison. "This has to do with the law. And when you break the law, there's punishment for what you do. He broke the ultimate law, and he had to pay the ultimate price, as my husband did."

She said as a nurse of 25 years, it was "totally against my grain to see something like this."

"But it's justice for my husband. It is the law. It's part of the system he believed in and worked for, and society has to have rules to maintain peace."

Stuart Alexander, 47, was standing in a grassy area on the side of a highway where he had put spike strips when he was struck by the SUV Lopez was fleeing in.

Lopez, who also wrote letters to a federal judge and pleaded for his execution to move forward, said last week from death row that a Supreme Court reprieve would be "disappointing."

Nueces County District Attorney Mark Skurka said Lopez showed "no regard for human life" when he fought with an officer during a traffic stop, then sped away, evading pursuing officers and striking Alexander, who had been on the police force for 20 years. Even when he finally was cornered by police cars, Lopez tried ramming his SUV to escape and didn't stop until he was shot.

Lopez was properly examined by a psychologist, testified at a federal court hearing about his desire to drop appeals and was found to have no mental defects, state attorneys said in opposing delays to the punishment.

Deputies found a dozen packets of cocaine and a small scale in a false compartment in the console of the SUV.

Records showed Lopez was on probation at the time after pleading guilty to indecency with a child in Galveston County and was a registered sex offender. He had other arrests for assault.

Testimony at his trial showed he had at least five children by three women, and a sixth was born while he was jailed for Alexander's death. Court records show Lopez had sex with girls as young as 14 and had a history of assaults and other trouble while in school, where he was a 10th-grade dropout.