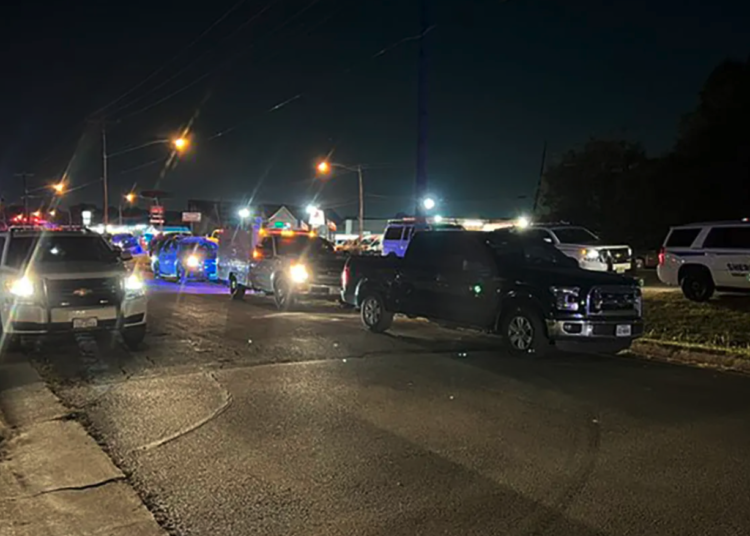 Sgt. Rick Alexander, the spokesman for the Haltom City Police Department, said a gunman killed two people and wounded a third before killing himself at a residence in Haltom City, which is near Fort Worth. Three responding police officers were also wounded during an exchange of gunfire with the suspect.

Police received a 911 call regarding “shots fired” at 6:45 p.m. on Saturday in a residential area by an “elderly” woman who was later found to be shot in the leg, according to footage of a press conference at the scene published by WFAA-TV.

Responding officers exchanged gunfire with the suspect. During the gun battle, three police personnel were wounded. Each officer was struck in the leg and one also received injuries to his hand. They are all expected to survive, according to Alexander.

When the shooting subsided, a “fairly lengthy” search for the gunman ended when police found him about a block away from the crime scene.

The suspect took his own life. He was not identified. Police discovered his body next to a “military style rifle, and a handgun in the vicinity of his arms,” Alexander said.

Moreover, a man was found shot to death in the driveway of the home, and a woman was found dead inside the residence, according to police.

An elderly woman, the person who called the police, was also found with a gunshot wound to her leg, WFAA-TV reported. She is expected to survive.

Their identities were not released. The relationship between the shooter and the victims was not immediately clear.

As the media pressed for information, Alexander said, “Let us work; we’ll get all the information out as quick as we can. But, just pray for all of us, the families, and we’ll pull through this, and be strong like we always are.”

“We are working an active scene and have an armed suspect,” a Facebook post by the department read.

During the search, the neighborhood was told to remain inside, while the gunman was described as a “white male, dark hair, wearing blue shirt, blue pants, ‘battle belt,’ and is armed with a rifle.”

The Texas Rangers were taking over the investigation, local police said.

In the aftermath of the chaos, Haltom City Police thanked allied agencies and the public for their support, Fox News reported.

“We want to thank our partner agencies for assisting us this evening.  We also want to thank our wonderful residents for the thoughts, prayers, and well-wishes for our injured officers and we extend our sympathies and condolences to those victims that were also involved impacted by this incident,” the department said.