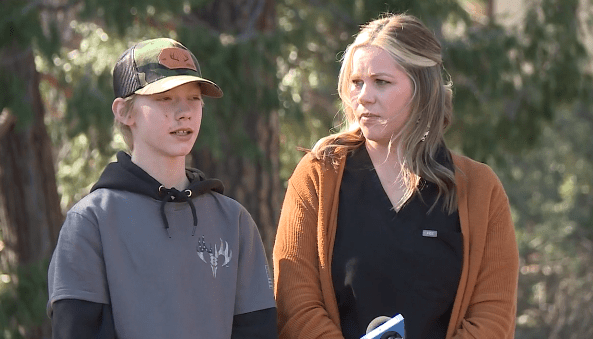 GRASS VALLEY, Calif. – A student at Lyman Gilmore Middle School in California said a substitute teacher provoked an intimidating altercation over the image of the “Thin Blue Line” flag on a mask he wore in class.

The confrontation occurred at the school in Grass Valley and was filmed on cellphones by multiple students in the classroom on Monday, CBS Sacramento reported.

Lucas Lillar, 13, said he was in math class working when the substitute teacher sat at an empty desk behind him and began to provoke an argument over the image on his mask.

Lillar’s father and stepmother are law enforcement officers. As a result, he frequently wears the mask as a show of support for his family.

The “Thin Blue Line” flag honors fallen members of law enforcement, but it has been degraded by police antagonists and people demonstrating sheer ignorance as they wish to defame peace officers.

“I was extremely angry and heartbroken, that this…that he had to deal with it,” said Amanda McCallum, Lillar’s mother.

After approaching school administrators, McCallum said she was told by Lyman Gilmore’s Principal that the substitute teacher will not be able to teach at the school in the future.

“It just makes me feel worried,” Lillar said when asked about what it is like to be the son of a member of law enforcement.

“I never had someone talk to me like that, yell at me in my face, especially a teacher,” the middle school student said. Lucas Lillar shows the mask he was wearing in class.

Grass Valley School District Superintendent Andrew Withers responded to the news outlet via email when asked about the situation. He wrote that he cannot comment further on personnel matters. He also wrote:

The California Education Code §44953 allows for the immediate dismissal of a substitute teacher. Our district expects all educators to perform their duties with utmost respect and professionalism.

Nevada County Superintendent of Schools Scott W. Lay also replied to CBS Sacramento via email. He refers back to the district where the incident took place and cannot comment on personnel matters. He wrote:

The incident is currently under investigation, and we will take appropriate action. The California Education Code §44953 allows for immediate dismissal of a substitute teacher. We expect all educators to perform their duties with utmost respect and professionalism to afford our youth an environment conducive to learning. The California Commission on Teacher Credentialing that governs educator credentials will be informed of this incident.

McCallum has aspirations of meeting with the superintendent next week.