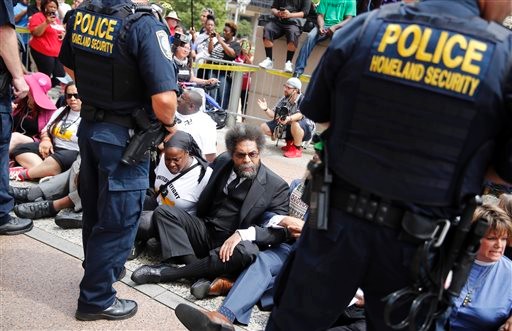 FERGUSON, Mo. (AP) — The latest in the events marking a year since the death of 18-year-old Michael Brown in Ferguson, Missouri (all times local):

About 50 protesters have been arrested after blocking the entrance to a St. Louis federal courthouse while calling for more aggressive U.S. government response to what they call racist law enforcement practices.

The arrests of scholar and civil rights activist Cornel West and the few dozen others were part of what's been billed as a national day of civil disobedience. They come a day after the one-year observance of the Ferguson police shooting death of Michael Brown, and police shooting there Sunday night that wounded another black 18-year-old, who police say fired on officers during nighttime protests.

Monday's arrests came after a roughly mile-long march from a St. Louis church to the Eagleton courthouse. That's where marchers demanded federal action to stop what policing they say targets minorities. The protesters then scaled a waist-high barricade, staging a sit-in before advancing past police to the entrances.

St. Louis County Executive Steve Stenger has issued a state of emergency, a move that authorizes county Police Chief Jon Belmar to take control of police emergency management in and around Ferguson.

Belmar has not said what steps he will take to preserve order, a day after violence broke out during protests on the anniversary of the fatal shooting of Michael Brown.

Several shots rang out late Sunday night on West Florissant Avenue. Police shot and critically wounded one suspect, 18-year-old Tyrone Harris Jr., after he allegedly shot through the windshield of an unmarked police van with four plainclothes officers inside.

The officers were not injured. Harris' father says he believes that his son was unarmed, and he called the police version "a bunch of lies."

Prosecutors have filed 10 counts against Tyrone Harris, the 18-year-old black suspect who was critically wounded after being shot by police Sunday night in Ferguson.

The office of St. Louis County Prosecutor Bob McCulloch on Monday announced charges that include five counts of armed criminal action, four counts of first-degree assault on a law enforcement officer and one firearms charge. All 10 charges are felonies.

Harris' father, Tyrone Harris Sr., says two girls who were with his son told him he was unarmed and "running for his life" when he was shot.

The father of a black 18-year-old who was critically wounded after being shot by police calls authorities' account "a bunch of lies" and says his son was unarmed.

Tyrone Harris Sr. of St. Louis tells The Associated Press that Tyrone Harris Jr. was shot eight to 12 times. Police say he is in critical condition.

The shooting happened late Sunday on the anniversary of the death of Michael Brown, who was fatally shot by a white police officer.

The elder Harris says his son was caught in a dispute between two groups and was "running for his life" when shot by police.

An NAACP official says he doesn't expect the shooting of a suspect by a county police officer in Ferguson on the anniversary of Michael Brown's death to escalate into unrest in the St. Louis suburb.

NAACP board member John Gaskin III says some people may not believe the police account of the incident overnight that left a shooting suspect critically wounded, noting "there's still a tremendous level of distrust between law enforcement and the community."

Nonetheless, Gaskin says he expects Monday night to be free of reactive violence, thievery and destruction.

The Aug. 9, 2014, killing of Brown, who was black and unarmed, by a white police officer sparked a national "Black Lives Matter" movement.

This story has been corrected to show that Harris was shot by a county police officer in Ferguson, not a Ferguson police officer.

The shooting of a suspect by plainclothes officers in Ferguson is drawing criticism from protest leaders.

The Ferguson Action Council is a coalition of organizations that have united in protests. Some members of the council released a statement critical of the police response during the Sunday night protest.

Kayla Reed of the Organization for Black Struggle says the force shown by police was "excessive and antagonistic." She called it a "poor decision" for officers to be in plain clothes because it made it difficult for people involved in protests to identify police.

She and others were also concerned because police were not wearing body cameras. St. Louis County Police Chief Jon Belmar says the department doesn't have funding for body cameras for all of its nearly 900 officers.

Kansas City police arrested four people during a protest marking the anniversary of the police shooting that killed Michael Brown in Ferguson.

The Kansas City Star reports (http://bit.ly/1DCb9yl ) dozens of protesters gathered near a shopping center Sunday evening. Police arrested four people who put tape across a roadway and lay down in the street. They were cited for blocking a roadway.

Police said Stokes had a gun and didn't obey commands to show his hands. Stokes' family disputes that he had a gun and said he might not have heard the commands.

St. Louis County police say two young males have been injured in what appears to have been a drive-by shooting near a monument to Michael Brown, who was shot to death a year ago.

Spokesman Shawn McGuire said in an email that the 17-year-old and 19-year-old males told officers they were walking around 2:15 a.m. Monday near the Canfield Apartments in Ferguson, Missouri, when an unknown black man shot at them from the back of a passing vehicle.

The shootings come as the St. Louis suburb marks the anniversary of the killing of Brown, a black 18-year-old, by a white Ferguson police officer.

St. Louis County Police Chief Jon Belmar says a man who opened fire on officers in Ferguson, Missouri, is in "critical, unstable" condition after being struck when the officers returned fire.

Belmar said at a news conference early Monday morning that plainclothes officers had been tracking the man, who they believed was armed, during a protest marking the anniversary of the death of 18-year-old Michael Brown.

Belmar says the man approached the officers, who were in an unmarked police van, and opened fire. The officers returned fire from inside the vehicle. They then pursued the man on foot.

The chief says the man again fired on the officers. All four fired back.

The man was taken to a hospital, where Belmar said he was in surgery. The man was not immediately identified.

Belmar says the police shooting happened shortly after dozens of shots rang out around 11:15 p.m. Sunday, as protesters were gathered on West Florissant Avenue. The crowd went running for cover.

Brown, who was black and unarmed, was fatally shot by white Ferguson Police officer Darren Wilson. A grand jury and the U.S. Department of Justice declined to prosecute Wilson, but the shooting touched off a national "Black Lives Matter" movement.