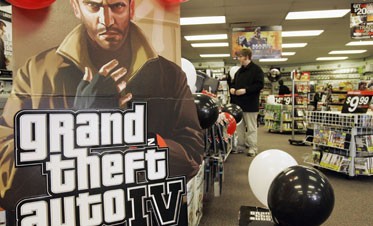 About a week ago, Grand Theft Auto IV, the latest installment in the series, went on sale. The response lived up to the hype of the expectation. A report posted late Tuesday on CNET.com indicated that the game sold six million copies in its first week on the market, more than half of those on the first day. Over the game's lifetime, sales are expected to reach 16 to 19 million units, producing around $1.5 billion on an investment of about $100 million. Take a moment to appreciate the magnitude of those numbers.

It's disturbing that more money was spent on a single computer game in one week than is spent on things that are arguably more important, but more so when I consider the subject matter of this entertainment gem. Grand Theft Auto IV is a realistic virtual adventure where the player assumes the persona of Niko Bellic, a former combatant in the Bosnian war. In the fictitious Liberty City, roughly modeled on New York City, Niko steals cars, gets drunk, engages and enjoys the favors of prostitutes, robs people, runs from cops, and generally enjoys a robust and fulfilling life of crime. Because these activities frequently overlap, Niko gets to bludgeon the rightful occupants of the cars he takes, drives drunk–there is a special immersive game mode for this–shoot and kill cops, and abuse the resulting corpses thereafter. As the icing on the cake for the commercial sex experience, Niko can specify and relish in the erotic act of his choice, then murder the hooker afterwards. He has considerable latitude here, as he can shoot them with any of several firearms, beat them with a baseball bat, or just run over them with his car, to list some of the less gruesome options. Just good, wholesome American fun.

As the player progresses through the game, he or she amasses points for their criminal exploits, with bonuses for exceptionally creative violence. Because there are so many paths one can take through Liberty City, the variation is almost endless, and there is really no end to the game. If Niko gets killed or busted, or manages to off everyone else and steal everything in Liberty City, the player can always hit the reset button and start over.

GTA IV carries a rating of "M" for "mature", meaning that retailers are supposed to sell it only to purchasers 17 and older. Surveys by watchdog groups indicate that this policy is ignored more than half the time. Further, polls show that the GTA series is far and away the most popular console game among players ages 12 to 14, although game industry sources counter that the typical gamer is between the ages of 29 to 32.

Wal-Mart won't sell Playboy magazine because it contains pictures of nekkid women. The world's largest retailer further protects America by disdaining the sale of music containing excessive pottymouth (most of the titles for sale in Wal-Mart's rap/hip-hop listings indicate those editions are "edited"). But they will happily take your money for a copy or four of GTA IV, despite a description from the Associated Press that the game includes a "nearly constant stream of filthy language."

It's hard to draw a causation link between "play" of this type and violent criminal behavior. Interviews and investigations in high-profile murder cases frequently reveal a fondness for violent computer games that approaches obsession, sometimes playing them more than 12 hours per day. Then again, there are apparently at least six million people playing this latest version, and no one expects them all to be serial killers. That kind of argument can go on endlessly.

There are all sorts of diversions that encourage us to vicarious thrills. Reading Superman comic books made me daydream about having x-ray vision, and I got to fantasize on being a fighter pilot when I saw Top Gun. And those were less-than-immersive media, where I didn't have any control over the plot or the decisions of the characters. I can't see anything good coming of exposing impressionable people, still forming their core value systems, to an environment that rewards sociopathic behavior and encourages defiance of authority by force.

I am a big fan of the first amendment, and the 26 that come after it, for that matter. One of the Five Freedoms guaranteed there allows me to say pretty much anything I want in this column or elsewhere, and I'm not going to tell Take Two Interactive (GTA IV's publisher) or anyone else they don't have the same rights I do. But we have a covenant in our society that governs the dissemination of images, speech and ideas that are generally considered offensive. What falls under that "offensive" label is a continuously-evolving standard. The television programs I watched as a child couldn't show a husband and wife sleeping in the same bed. Programs on broadcast channels in prime time now depict husbands and wives in beds other than their own, speaking words once considered profane, and displaying anatomy that most people take care to cover up. Times and standards change, and need to.

Is it possible that we have sunk so far as to accept that theft, murder, rape and other violent acts are an acceptable form of recreation, virtual or otherwise? Do we want to reward the kind of behavior that makes international headlines and places uninvolved people in fear of their personal safety, even if it's only "play"?

Members of the law enforcement community are prominent stakeholders in this, as GTA IV specifically targets cops as high-value targets. If you're a cop and a female, you've got twice as much reason for concern. GTA IV has less regard for women than most varmint hunters allow for rats or prairie dogs. The hunters (well, the ones I know, anyway) don't sexually abuse the animals before they shoot them.

The Chicago Transit Authority pulled ads for GTA IV from its buses and stops (and they're being sued by Take Two for their trouble). Miami-Dade Transit did the same, and will probably suffer the same consequences. Makes we want to ride the bus, just out of principle. MADD has asked for GTA IV to lose its "M" rating and move to "AO" (Adults Only) for its treatment of drunk driving as a game. Rockstar Games, which developed GTA IV, responded, " We have a great deal of respect for MADD's mission, but we believe the mature audience for 'Grand Theft Auto IV' is more than sophisticated enough to understand the game's content." Given the evidence and context, I don't think "mature" was quite the right word here.

This is not a call to arms. I'm not trying to advocate an international crusade against GTA IV or anything else. But I would like you to consider the amount of influence you may have as a cop, a consumer, and a parent, if you are one. When you patronize a business that is selling or doing something you find objectionable, consider whether you should vote with your wallet and go elsewhere. Ask the merchant if they know the content of their wares, and the potential they have for harm. Know that many people listen to police officers and will make decisions with your advice in mind. And with regard to that parent thing, know what your kids are doing and encourage other parents to do the same. Imagine how things might have been different if the parents of certain students at Columbine High School, Westside Middle School in Jonesboro, AR, and at Virginia Tech had done so. It's the first line of defense.

Be safe and be well.