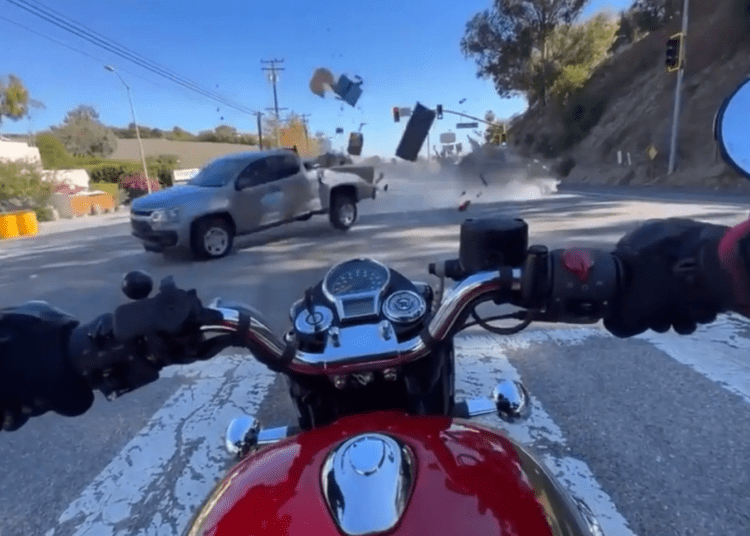 The motorcyclist had no time to react as the pickup truck came crashing forward. (Downtown LA Scanner @DowntownLAS)

MALIBU, Calif. – Shocking video taken from the vantage point of a motorcyclist sitting at a traffic light in Malibu seconds before a pick-up truck was hit broadside by a Lexus and subsequently flew into him was posted on Twitter.

The stunning sequence appears to show the perspective of the rider involved in a Nov. 14 three-vehicle collision that left the driver of a stolen Lexus dead, according to the Los Angeles County Sheriff’s Department.

Footage from the video shows the unidentified motorcyclist waiting to make a left turn off the busy Pacific Coast Highway onto Kanan Dume Road, reported The Malibu Times.

Here's video from a motorcyclist of that fatal crash that happened in Malibu on Nov 14. pic.twitter.com/Mf6bUNGZYL

Despite several vehicles traveling along the busy highway, a black Lexus SUV zips off Kanan Dune Road in an attempt to cross in between the passing automobiles, but clips the back of a full size gray pickup truck, ABC 7 Los Angeles reported.

In an instant, the truck is sent flying directly at the motorcycle rider as a ladder and other materials are tossed out of the bed, according to the New York Post.

The biker was transported to the hospital and miraculously survived the collision, though his condition wasn’t clear, The Malibu Times reported. The condition of the truck driver remains unknown.

The driver of the speeding SUV, which was determined to have been stolen about an hour before the crash, died shortly after the collision.

A spokesperson with LASD said the unnamed suspect struck about six warning markers in the center median after coming down an incline at a high rate of speed, ABC 7 Los Angeles reported.

The Lexus careened off the truck and slammed into a 30-foot-high embankment before landing upside down.

Despite rescue efforts from people in the area, the mangled vehicle caught fire and exploded before the driver could escape, reports said. The suspect was airlifted to the hospital, but did not survive.