"Waiting another six to eight months for a statewide response to the wildfire currently burning in our largest city will allow the blaze to become an inferno, to become unmanageable," Fletcher said. 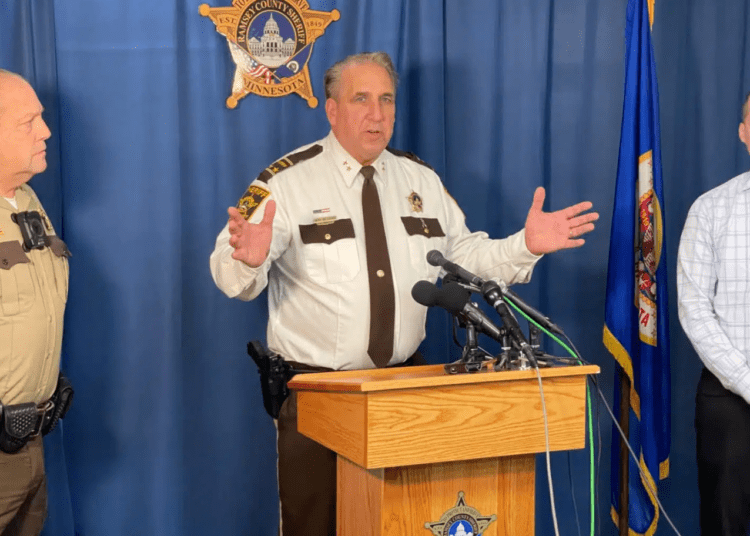 Ramsey County Sheriff Bob Fletcher is leading the charge and was joined by Ramsey County Undersheriff Mike Martin, a husband of a carjacking victim, and the mother of a repeat juvenile offender.

“We have a small chance to put the fire out. The fire is burning,” Fletcher said. “Everything that happens in Minneapolis impacts the rest of the metropolitan area.”

Fletcher wrote a detailed letter to legislative leaders this week explaining exactly what the problems are and proposing possible policy solutions.

“For 45 years, I have closely watched crime trends, and I can say with certainty that the Twin Cities are at a historic point when it comes to criminal activity on our streets and in our neighborhoods,” Fletcher wrote in his letter.

“Stemming the crime trends of the past two years will require the immediate help envisioned, discussed and largely agreed upon during the last legislative session. Those conversations and agreements were tabled months ago in hopes that they could be revisited at a later date. But waiting another six to eight months for a statewide response to the wildfire currently burning in our largest city will allow the blaze to become an inferno, to become unmanageable. We cannot afford to delay legislative help,” he continued.

Fletcher urged Gov. Walz and legislative leaders to agree to a special session focused specifically on crime immediately after the November election.

With a $12 billion surplus, Fletcher said Minnesota has a chance at “curbing the fire.”

He also called attention to the failures of Minnesota’s juvenile justice system.

“Today, offenders are either sent to Greater Minnesota facilities or, essentially, set free to offend again,” he said. “To give you a better idea of the challenges your sworn officers, deputies and troopers are facing, I’ve attached criminal history summaries for 10 young people who continually find themselves arrested, charged and released. Sadly, they are spinning out of control with no support, structure or meaningful consequences.”

Fletcher said there are about 75 young people who are responsible for most of the violent juvenile crimes in the east metro area.

“My fear — a fear shared by crime victims, parents of young offenders, and the general public — is that without leadership and investment from the top, our state’s sense of safety and security will continue to erode,” Fletcher concluded his letter.

Fletcher was joined Wednesday by a man named John, who described the horrifying experience of his wife, daughter, and niece in Uptown Minneapolis.

“What happened to my wife and 6-year-old daughter and 6-year-old niece should never happen in Minnesota. This is not the Minnesota that I know and love. Over the last few years it’s gotten really bad. I had no idea how bad it was until this incident happened,” John said.

John’s family members were the victims of a carjacking attempt in which the suspects wore masks and held them at gunpoint. Luckily, John’s wife was able to make enough noise to alert community members and the suspects got in the getaway car and drove off.

“Thinking about going to see a Twins game in the summer, there’s no way we’re doing that again,” John said.

Some of the key proposals outlined in Fletcher’s letter include increasing sentences for repeat offenders, $2 million in funding for police recruitment, $2.5 million for tuition reimbursement for police officers, defining carjacking as its own crime, and more.

“We share Sheriff Fletcher’s concerns and know that rising crime and public safety is a top priority for Minnesota families,” House Minority Leader Kurt Daudt said. “We know that Democrats have demonized and demoralized law enforcement with their harmful rhetoric and know that law enforcement needs additional resources to protect communities and hold criminals accountable. Change is coming and Republicans are ready to work with law enforcement to restore safety and security in communities across Minnesota.”