Leonna Hale is charged with unlawful possession of a firearm, unlawful use of a weapon, and resisting a lawful detention 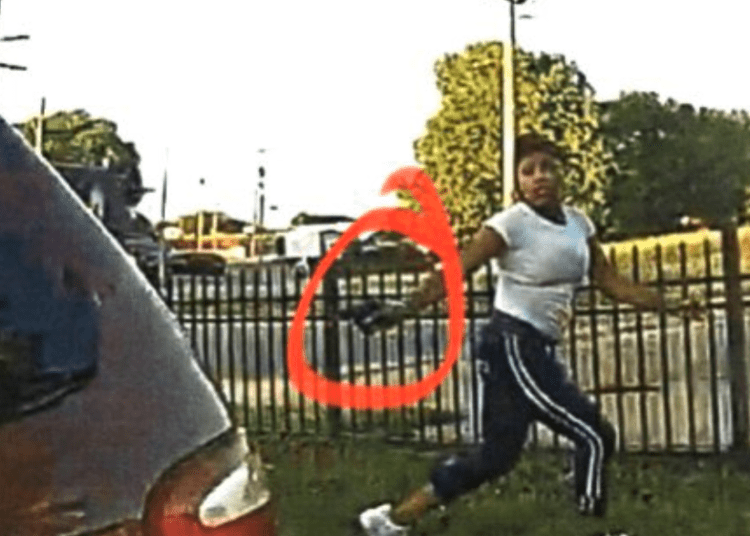 However, the destructive deception is being refuted by Jackson County prosecutors as a still image has been released showing the woman was armed with a handgun. She has been identified as Leonna M. Hale and she’s been charged with unlawful possession of a firearm, unlawful use of a weapon, and resisting a lawful detention, according to FOX 4 Kansas City.

“Video surveillance from body cameras showed Hale being told to drop the firearm and pointing it at the officers before the officers fired three shots,” FOX 4 reported. “One officer told investigators she feared that Hale was going to shoot her and she discharged her firearm one time. A second officer also told investigators that he believed Hale had a firearm pointed at him.”

Kansas City police shot at a person who brandished a pistol. https://t.co/zbX7ycQHwv pic.twitter.com/pKQ5dZ11EY

Jackson County Prosecutor Jean Peters Baker noted in a press statement Wednesday that their “review of the investigation revealed the defendant, although she denied having a weapon at the time of the encounter with law enforcement officers, continually displayed a weapon during her encounter with police officers and also appeared to be attempting to flee.”

“The two officers stated that she was armed with what they believed to be a handgun,” Baker added. “Body camera footage confirms the officers’ statements that Hale was holding a handgun. Still photos, taken from body cam footage, of this encounter also demonstrate a weapon was present and in the hands of the defendant.”

Baker blasted the “false narratives” that exploded on social media stemming from the bogus claims the suspect was unarmed, the Daily Wire reported.

“Some false narratives about what happened last Friday night at 6th and Prospect Avenue, unfortunately, were relied upon by some media and other sources,” she said. “Our job, as prosecutors, is to remain neutral and review all evidence. Our review of body cam videos provided the actual accounting of events that night.”

After Friday’s shooting, the Missouri State Highway Patrol said they were asked by Kansas City Police to investigate the officer-involved shooting.

“On May 27, at 7:53 p.m. #KCMO officers spotted a suspect vehicle at the Family Dollar store located on Prospect & E. 6th,” the highway patrol said in a tweet. “The suspect vehicle matched the description of an alleged armed carjacking suspect, reported by @KCKPDChief, a crime which apparently occurred in their city earlier in the evening.”

“As officers attempted to make contact with the occupants, the male driver (unidentified at this time) exited the vehicle and fled on foot & was apprehended,” they continued. The female suspect (Leonna M Hale, 1/6/96, KS) exited the vehicle & fled into the parking lot. Two officers fired shots. A suspect handgun was recovered from the scene. Hale was seriously injured & her condition is stable. No other injuries.”

…fled on foot & was apprehended.

Two officers fired shots. A suspect handgun was recovered from the scene. Hale was seriously injured & her condition is stable.

FOX 4 said they are still trying to confirm that Hale is pregnant as she’s being treated in the hospital for her wounds. It is unclear when she will be released.

It was also unclear if the suspects were connected to the carjacking that was reported earlier.

Meanwhile, Journalist Andy Ngo documented many of the examples of far-Left activists and leftist news organizations that promoted the false narrative that Hale was unarmed.