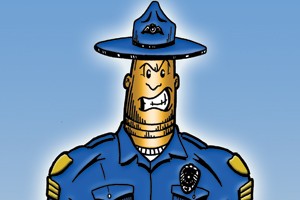 Dear Bullethead,
I'm a jail deputy. Because I had no law enforcement experience, I was required to start in the jail. My jail commitment is up, but I'm not sure I want to make the sacrifices for patrol. I would have to drop back to base pay and lose my seniority for transferring divisions. I would also have to wait six months before working overtime again.

What's your opinion on jail work? Most cops I talk to don't put it on the same level as patrol work we're seen as inferior. I love the work, I'm not bad at it and the jail offers a lot to deputies willing to go the extra mile. I think I could probably do this work for 20 years, but I don't want to miss out on anything. Jailbird

Dear Jailbird,
There's nothing like patrol work. I can't imagine not having spent time in patrol, and I look forward to returning to patrol in the future. Patrol is truly the place where you never know what's going to happen. One shift could be so slow you think the town folded up the streets and went home. Other times you're screaming around the city or county with your hair on fire. One minute you're having a cup of joe and shooting the breeze about your new house, the vacation you just took, your kids, etc., and the next minute you're in a 100-mph pursuit.

Patrol lets you see people at their worst. Imagine someone who thinks their child has been taken. And it lets you see them at perhaps the happiest moment in their life, such as when you find someone's child. Be ready, though, because we don't find all of them, and that will affect you forever.

That's right bud, patrol work isn't all joking with your partners and felony stops. There's a lot to patrol that none of us want to do, and in a perfect world no one would ever have to do. Try telling a mother her 18-year-old son who was about to graduate high school just died in a car accident. Try dealing with a lost Alzheimer's patient and realizing your own parents are only a few years younger than the person you're helping. Go see a dead child at a traffic accident who is the same age and wearing the same clothing your own kids wear. Then get a call from your wife who tells you how she was late to preschool, had to speed and almost got t-boned because she timed a light wrong and hit it just after it went red. We all do it from time to time, but you're gonna want to scream at her because of what you just saw. Scream at her too often and you will end up seeing those kids every other weekend.

Enough of the depressing stuff. It's there and it will take its toll, but if you're cut out to be the Popo, it will be worth it to you.

Patrol is the backbone of police work, but it often gets treated like the backside. Every chief and sheriff in the country will feed the patrol dogs that backbone line whenever they come to briefing. Then they stick it to you. The black and white fleet will be on its last leg, but that chief will be driving a brand new ride. I'll give the chief a nice ride just because, but the captains and lieutenants should get last pick after the patrol fleet is up to speed.

The screwing patrol receives only starts with the fleet. You will be checking equipment in and out every day, and they won't purchase any more because they spent the money on something else that does nothing for the backbone of police work. Next, every time a new project or unit grabs the eye of the Head Shed, they will strip patrol staffing down to dangerous levels to find folks to work the project or unit. But you know what? Patrol is still great.

Hey brother, in case you haven't guessed, 'Ol Bullethead is a city cop. I've never spent time in the jails except to drop off guests. I know plenty of deputies who tell me it s a great way to learn about crooks before dealing with them on the street. I'm sure it is, and in retrospect it's an experience I wish was on my resume.

If you think people are looking down at you, remind the county deputies where they came from and invite the city cops to work a shift I can pretty much guarantee you'll get zero takers on that one. You might not be able to work OT, but if you get the right FTOs you should get plenty of OT trying to stay caught up with all the paper you ll be writing. You'll miss the jail, but only until you get your feet under you and start tearing it up in patrol. So go, young man, and arrest many.

Got a question or complaint? Let Bullethead hear about it. He'll give you his opinion WITH BOTH BARRELS. Contact him via e-mail at [email protected] or fax him at 619/699-6246.