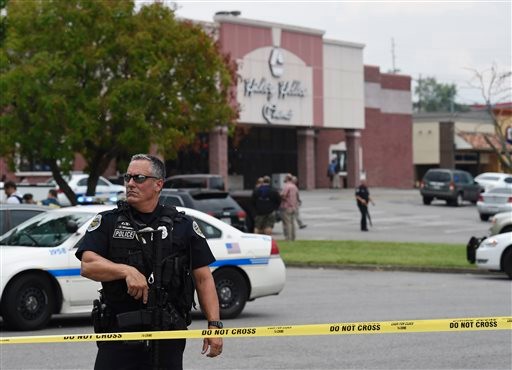 ANTIOCH, Tenn. (AP) — A suspect wielding a hatchet, gun and pepper spray inside a Nashville-area movie theater died after exchanging gunshots with a SWAT team as he tried to escape through the theater's rear door, police said Wednesday.

The suspect, whom police identified as a 51-year-old white local man, was armed with a gun and a hatchet or an ax during a showing of "Mad Max" at the Carmike Hickory 8 theater in Antioch, said Don Aaron, a spokesman for Metro Nashville police.

Aaron said the suspect was carrying a backpack on his chest and was wearing a surgical mask, possibly to protect himself from the pepper spray he unleashed in large amounts, Aaron said. He said three people were blasted with the spray and treated. One of those people also had a superficial wound that could have been caused by a hatchet, said fire department spokesman Brian Haas. No one was taken to a hospital. The only person shot was the suspect, Aaron said. A bomb squad was checking the backpack to make sure it did not contain any explosives and Aaron said people in the immediate vicinity might hear a loud boom if they had to detonate it.

Aaron said an officer came into the theater, where at least 20 people were present, seconds was fired upon by the suspect. The officer shot back, then backed off. About two dozen gunshots could be heard in a 10-second period in raw video footage posted online by WKRN TV.

Eric Vale, 32, an Uber driver, told The Tennessean newspaper that he was dropping off passengers in the theater's parking lot when he heard gunshots.

He described it as "utter chaos."

"I just couldn't believe this was happening again," he said.

The theater in Antioch is near Global Mall, a shopping center in a middle-class neighborhood.

The latest shooting comes about two weeks after a gunman opened fire inside a movie theater in Lafayette, Louisiana, during a screening of the film "Trainwreck." Police said John Russell Houser killed two people and wounded nine others before fatally shooting himself.

Also Wednesday, jurors in Colorado were preparing to decide whether James Holmes should be executed for murdering 12 people and trying to kill 70 others in a 2012 attack at a Batman movie.