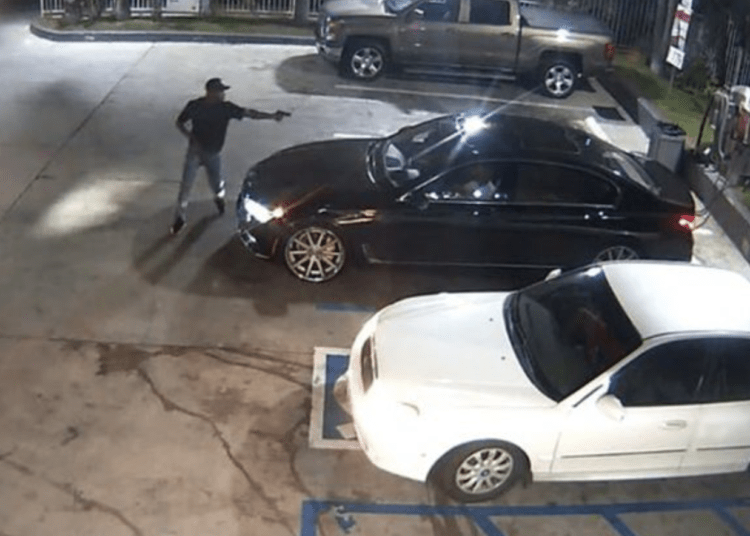 LOS ANGELES — A man who pointed a gun at people in a South Los Angeles gas station parking lot was shot and killed by officers, according to the Los Angeles Police Department.

The shooting occurred late Wednesday after the armed man approached four people in the lot at 111th and Figueroa streets and officers on patrol saw the situation, the department said in a tweet.

“The officers stopped and gave the suspect commands which he failed to comply with — at which point an officer-involved shooting occurred,” the department said.

An LAPD Southeast patrol unit was traveling eastbound on 111th St and saw the suspect and victims. The officers stopped and gave the suspect commands which he failed to comply with—at which point an officer involved shooting occurred.

Additionally:
7 protestors (which were later discovered to not be from the area) were arrested for 148 P.C. following the officer involved shooting. pic.twitter.com/90Sc2hNvUG

Nearby, a deputy-involved shooting occurred around 4 a.m. Thursday at 108th Street and Vermont Avenue.

A man was shot and killed by Los Angeles Sheriff’s Department deputies after a brief chase in a South Los Angeles neighborhood after they say he kidnapped a woman and shot at good Samaritans, KNBC-TV reported.

The shooting was reported at about 4 a.m. in Vermont Vista. Aerial video showed several patrol vehicles and yellow police tape in a residential neighborhood cul-de-sac.

The man was initially wanted for assault with a deadly weapon, according to authorities. The pursuit lasted only about one minute.

Additionally, LAPD officers engaged in a shooting that wounded a woman in the Winnetka area of the San Fernando Valley around 2:30 a.m. Thursday, Fox reported.

Police responding to a report of a trespasser at a hotel went to a room where they encountered the woman armed with a handgun, the department said.

Share and speak up for justice, law & order...
Tags: LAPDLASDois