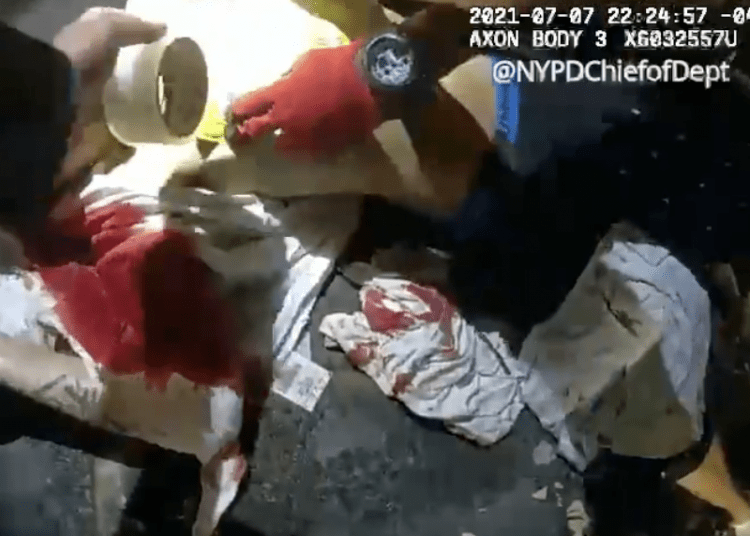 Officer Ronald Kennedy uses an unorthodox technique to save the life of a stabbing victim. (Twitter)

NEW YORK — Emergency medical care requires unorthodox techniques on occasion in order to save a victim. That is exactly what transpired on the streets of New York when a police officer used a “bag of potato chips” as he rendered emergency first aid to a stabbing victim earlier this month, according to reports.

According to Harrison’s twitter comments, the July 7 stabbing on 125th Street in Harlem is “just one example of the heroic work that your NYPD officers do every day.”

This is just one example of the heroic work that your NYPD officers do every day. @NYPDShea @NYPDChiefPatrol @NYPDnews @NYPD28Pct pic.twitter.com/DAcF5e2i67

“They caught me in my lung,” the victim can be heard bemoaning.

Kennedy directed the assistance of a nearby young man.

“Go get me a bag of potato chips, right now!” Kennedy instructed. The unique solicitation was followed up with a request for duct tape.

Kennedy continued to take charge of the traumatic situation as he rallied some of those watching the victim bleed.

“Two people, over here, right now!” Kennedy ordered. “Lay him down! Help me lay him down!”

Kennedy dumped out the chips, used a knife to prepare the pieces of his makeshift bandage and then applied the “field dressing” to the victim’s chest, after the bloody shirt was removed, WJ reported.

“We got you, we got you, don’t touch!” Kennedy exhorted in a sense of encouragement.

As paramedics arrived to transport the victim, Kennedy advised, “It’s the best I can do with what I had.”

“Keep breathing, bro,” Kennedy instructs as the victim is taken away.

A knife was recovered at the scene, police said. Eric Rodriguez, 38, was arrested later arrested and charged with attempted murder, assault and criminal possession of a weapon, according to the New York Post.

Police said Rodriguez and the victim had been in a dispute when the stabbing took place.

Meanwhile, the New York criminal justice system has once again failed in its’ job to advance public safety. According to the Daily News, Rodriguez was arrested on July 11, four days after the stabbing. He was remanded to jail after his arrest, but released without bail following a court hearing on Friday, according to court records.