The chase lasted about 90 minutes 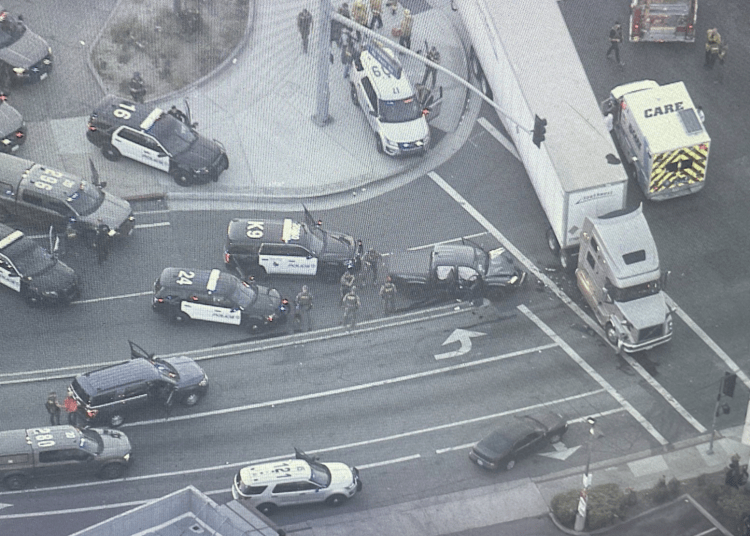 POMONA, Calif. — A murder suspect also wanted in connection to an assault on a law enforcement officer crashed into a semi-truck Tuesday evening following a pursuit that stretched across multiple counties in Southern California, according to reports.

The suspect is accused of assaulting a Riverside County Sheriff’s Department deputy when deputies attempted to make contact with the suspect after being alerted of the northbound chase, FOX 11 of Los Angeles reported. No details about the assault were immediately disclosed.

The chase ended around 7 p.m. in Pomona, in east Los Angeles, when the suspect turned left onto the wrong side of the street and hit the front end of the truck from the side while the truck driver was making a wide right, according to video.

The big rig truck driver, Ahmed Shabaan, said he tried to end the dangerous pursuit by blocking the pickup truck’s path. Shabaan said he knew a murder suspect was involved in the chase so he tracked the driver, lined the big rig truck so the suspect’s pickup truck would smash into the massive vehicle near an intersection in the Pomona area.

“I just thought to get him off the street,” Shabaan explained. “If I didn’t, and [officers] have been behind him for that long and didn’t stop him… I have the power.”

NEW: A witness just gave me this video of the crash at the end of the murder suspect pursuit in Pomona. I haven’t been able to talk directly to the big rig driver yet, but I yelled to him and asked if he blocked the truck on purpose and he shook his head “no”. @FOXLA pic.twitter.com/aAHsWNQJrr

The suspect-driver reached speeds exceeding 90 mph on Highway 60, drove on the wrong side of the road, nearly hit several vehicles and drove on a sidewalk at one point during the chase that started around 5:30 p.m., KABC-TV of Los Angeles reported.

Incredibly dangerous pursuit has a crashing end in Pomona: possible homicide suspect armed and dangerous drove from the I.E to San Diego county and turned into a maniac in LA County. Insane driving ended after crashing into a big rig. Suspect and one passenger surrendered @CBSLA pic.twitter.com/KVtqr8V0c2

Earlier in the day, the Riverside County Sheriff’s Department had been searching for the murder suspect in the area. When deputies tried to contact the suspect, the suspect attacked one of the deputies then drove off in a pickup truck, prompting a pursuit.

The suspect then led authorities on a chase across Riverside County, then to the East San Gabriel area.

The suspect vehicle eventually crashed into the big rig truck. The driver of the pickup truck was taken into custody and the passenger was briefly interviewed by deputies before releasing her.

The passenger, who identified herself as “Roxy,” said she had no idea the driver — who is her friend from Bakersfield — was wanted for murder, FOX 11 reported.

“We were hanging out and he said he wanted to help his friend in LA,” Roxy said. “I said, ‘I am down to roll. It’s all good. We’ll go help your friend.'”

BREAKING: Wildest moment of my 4 years in LA. @abc7leanne and I just interviewed the female in the pursuit vehicle who police let go. She says the driver is her friend from Bakersfield, says she didn’t know he’s wanted for murder. She was like a celebrity w/ the crowd. @FOXLA pic.twitter.com/6syD36c5nc

The suspect was taken to the hospital while in custody. Both Roxy and Shabaan were OK after the crash.

Law enforcement officials did not immediately identify the suspect or specify which murder he was wanted for.