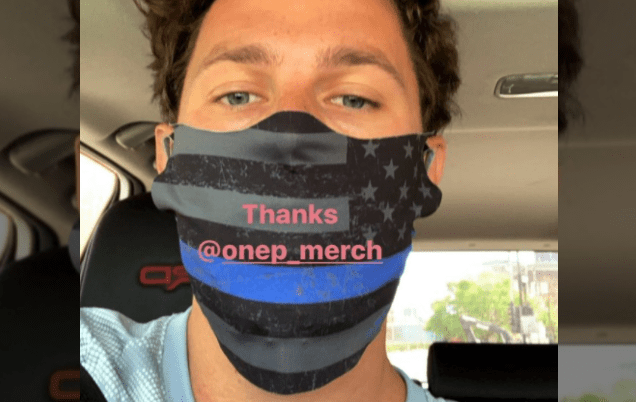 Police-haters are out in full force amid the George Floyd protests and riots in Minneapolis. As a result, Minnesota Twins outfielder Max Kepler came under fire for posting a photo of himself wearing an apparent “Blue Lives Matter” face mask, and he quickly distanced himself from law enforcement.

Kepler appeared to post the photo on Instagram. The mask appeared to have a subdued version of an American flag with a blue line going across the middle.

The flag symbolizes the “Blue Lives Matter” and is pro-police. However, some thought it was distasteful given Floyd’s custodial death, Fox News reported.

max kepler. i feel nothing but betrayal and disgust. pic.twitter.com/HM46Exi3cW

Kepler, who is from Berlin, Germany, apologized for posting the photo of himself in the mask, saying he did not know what it meant, according to the New York Daily News. He added in an Instagram message that Germany’s police colors are green.

“Earlier, I posted a photo of me in a mask that was sent to me by a company, to wear during the pandemic. I had no idea that the mask had any underlying inferences — I simply thought it looked good. After I was informed, I immediately took down the post,” Kepler said.

Earlier Thursday, the Twins were among the Minnesota professional sports teams who released statements on the Floyd incident.

“We are deeply saddened by the tragic and senseless death of George Floyd on Monday night in Minneapolis. The Minnesota Twins send our deepest sympathies to the Floyd family, and join with our Twin Cities community in mourning.

“We will continue working with our community partners to move forward with courage, free of hate and thoughtful in our path, to create the change we want to see in the world — one, all-inclusive Twins Territory, where everyone is protected, safe and welcome.”