Minnesota Governor Tim Waltz decried “It’s time to rebuild. Rebuild the city, rebuild our justice system, and rebuild the relationship between law enforcement and those they are charged to protect.” He then called out the Minnesota National Guard but never deployed them in the burning city of Minneapolis.

Minneapolis Mayor Jacob Frey called for the protests in his city. He espoused freedom of speech and the public’s right to demonstrate against an unresponsive government. He turned his city over to criminals for the sake of political correctness.

The Minneapolis police chief viewed the demonstrators as civil rights protestors and allowed them freedom to display their grievances against the local police department. In the meantime, he abandoned a police station and evacuated it, allowing the complete takeover by thugs and criminals.

This was a complete and total capitulation of leadership on three levels of governance.

As we all know by now, a person wanted for a minor criminal act was restrained in such a manner to cause serious injury or possible death. (Autopsy is not completed at this time). Investigations by local, state, and federal agencies will determine the outcome for these officers involved. This writing is focused on the aftermath of the incident and the comprehensive failure of leadership.

Demonstrations and protests are not only protected by our Constitution, they are encouraged to force our political leaders to govern in a proper and dignified manner. Rioting, arson, and looting are criminal acts and need to be immediately addressed by our leaders. This was the opposite cause and effect in Minneapolis.

The mayor was quick to vocalize and encourage demonstrations. These demonstrations quickly morphed out of control because the lack of foresight on the leadership. Instead of quelling the agitators and outside activists, the city administrators collectively conceded the city to them to, in order to appease, rather than control them. This left a police station cowardly abandoned, looted, and burned. This led to all out looting of major stores without taxpayer’s police protection. The shouts from a passing vehicle were, “Shoot the white folks.”  People were stabbed and responding firefighters and paramedics were attacked. A woman confined to a wheelchair was beaten by a crowd of a dozen people. Seventeen (17) major fires were reported and numerous automobiles were torched.

The chief of police withdrew his police officers and the National Guard was not used, although they are expected to deploy Thursday night. This complete lack of leadership and failure to protect the citizens of Minneapolis was purely political and absolutely cowardly. 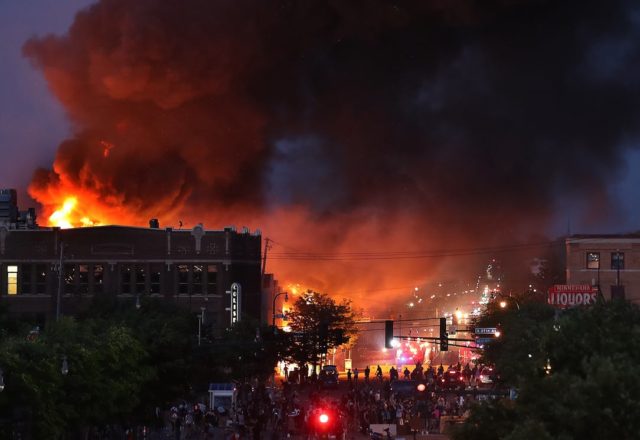 As a retired Chicago police officer, I cringe at the lack of leadership displayed. This situation should have been handled much differently. Separate the law abiding from the law breakers. Allow the grievance protestors their constitutional rights. Never allow police officers to be treated like cannon fodder and sacrificed in the name of politics. All citizens deserve protection regardless of color or race. Stores represent the life blood of communities and must be protected by the police who are paid by taxpayers. Criminals are not protestors and should never be treated in the same way. Looters, arsonists, and criminals who attack police officers need to be immediately separated from the demonstrators and arrested.

My advice to the governor, mayor, and police chief is, grow a pair and do your jobs.

Share and speak up for justice, law & order...
Tags: arsonMinneapolisprotestsriots