None of the video provides a clear angle of the shooting and authorities are asking people with video of the incident to come forward. 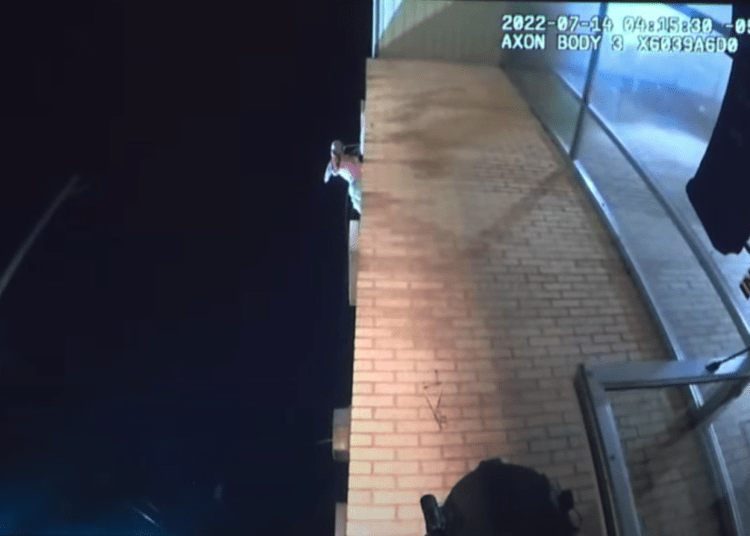 Andrew Sundberg is seen hanging out of his apartment unit in one of the videos. (City of Minneapolis)

On July 13, Andrew “Tekle” Sundberg shot into the apartment of Arabella Foss-Yarbrough and her two children located at 904 21st Avenue South. After police arrived on scene, a six-hour standoff ensued.

Minneapolis police snipers eventually ended the standoff when they killed Sundberg around 4:30 a.m. Sources told Alpha News that Sundberg pointed a gun out of the window of his apartment unit before snipers shot him.

While there was “hundreds of hours” of body-camera footage, the public was only shown 15 minutes, including the first and final moments of the incident.

The first body-camera video was from Officer Kapinos. The video shows the officer arriving on the third floor to knock on a metal fire door. Yarbrough and her two children eventually open the door and follow police to safety. Multiple gunshots are audible.

Body-camera footage from Sgt. Kelly shows Sundberg hanging from his third floor window after hours of negotiations with police, which included bringing his parents to the scene to communicate with him. Officers continued to negotiate with Sundberg, telling him to exit with his hands up.

“We don’t want to hurt you. We just want to go home. We’re going to get you the help you need, come on out,” Sgt. Kelly is heard saying.

Gunshots can be heard before Sgt. Kelly’s body-camera video ends.

Officer Pearson and Officer Seraphine were positioned on a rooftop across the street to protect residents and officers and monitor Sundberg’s movements.

One of the two can be heard saying “gun.” The officer then pulls the trigger.

None of the video, however, provides a clear angle of the shooting and authorities are asking people with video of the incident to come forward.