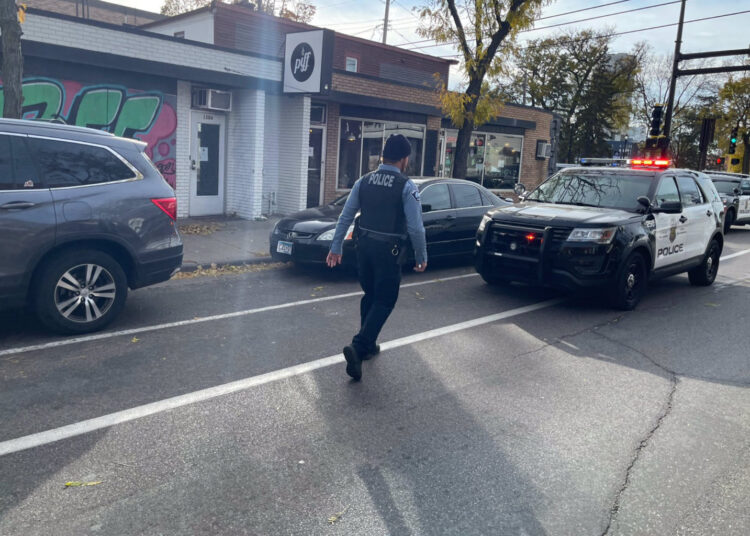 A Minneapolis police officer responds to a robbery in November. (Kyle Hooten/Alpha News)

A Minneapolis Park and Recreation Board committee advanced a new resolution Wednesday night that would allow a city police presence at park events once again.

Superintendent Alfred Bangoura wrote a memo to board members requesting the reversal of a 2020 resolution that prohibits officers from the Minneapolis Police Department from staffing park-sanctioned events and restricts park police from assisting city police with “non-violent incidents.”

“As nearly all park events occur within the City of Minneapolis, on-going coordination and cooperation with the Minneapolis Police Department is necessary for the interest of public safety,” he said.

The resolution was adopted on June 3, 2020, amid chaotic unrest and rioting following the death of George Floyd. Bangoura noted that the COVID pandemic has “subsided to a point where” the Park and Recreation Board can resume hosting “large public special events.”

In 2019 alone, Minneapolis police officers provided roughly 2,200 hours of special event coverage at parks, that is, 38% of the coverage.

Bangoura warned the number of special events “would need to be reduced” without assistance from the Minneapolis Police Department.

The Administration and Finance Committee passed the new measure in a 4-1 vote Wednesday night. It will be voted on by the full board in early May.

Commissioner Tom Olsen called the resolution a “tacit endorsement of the Minneapolis Police Department, which we severed our relationship [with] a couple years ago because they murdered George Floyd.”

He said Minneapolis police then responded to the “rightful unrest and protest” with a “stunning amount of less-lethal methods that have proven incredibly harmful and costly to our city.”

“I don’t feel comfortable endorsing the Minneapolis Police Department and restoring our relationship with them until they prove to our city that they have changed and that they are not the same organization that has murdered several of our neighbors,” said Olsen, who was the one “no” vote.

Law Officer is honored to partner with AlphaNews as they report on law enforcement stories from the Minneapolis Area. Find out more at: www.alphanews.org

Share and speak up for justice, law & order...
Tags: alphanewsMinneapolisMinnesotapark