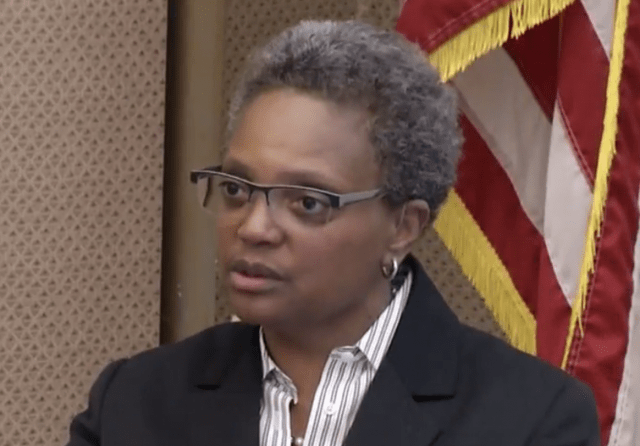 The call came into the 911 dispatchers requesting backup for an (ICE) Immigration and Customs Enforcement team attempting to stop a vehicle with wanted occupants in it. The occupants were illegal immigrants and had warrants on them for other criminal violations.

Dispatchers transmitted the request over the police radio and Chicago units responded. Once on the scene the CPD units determined the emergency was controlled and other CPD services were not warranted. They stood by for safety’s sake and eventually coded the job and returned to their routine patrol.

When Mayor Lightfoot was made aware of this federal agency receiving assistance from Chicago Police, she immediately announced to the media that she will demand more questions to be asked by the CPD dispatchers before directing CPD resources to support these federal agents.

This is where common sense intersects and clashes with political agenda. Law enforcement is blind. I’ll say it again, law enforcement is blind and the only concern of all law enforcement agencies and departments is to uphold the laws handed down through the proper means; Congress, Legislation and U.S. Supreme Court decisions. Police officers have taken a solemn pledge to uphold all laws regardless of their personal beliefs. I had, in my thirty-plus years on the CPD, enforced laws that I routinely disagreed with. I arrested poor people for steeling life’s necessities because the complainant demanded so. I arrested parents for physically disciplining their children even when the little darling deserved it. I arrested husbands for striking their wives even after being convinced that the wife deliberately set it up.

Laws are society’s tools used to maintain discipline and control antisocial behaviors. Laws are not meant to be challenged at the policing levels; that is the function of the courts and the legislators. Police officers are charged with enforcement, not pronouncements of ideology. That goes for the sitting politicians including Chicago’s mayor. She does not have the privilege of choosing which laws she agrees with and to not support those she doesn’t agree with.

“If a mayor of a city can pick and choose which outside agencies they allow their police department to assist, it becomes a slippery slope.”

To disregard calls from an outside agency requesting backup is contrary to all that is respected in the world of policing. When another law enforcement person is in need of assistance, whatever is preoccupying you is quickly discarded and the assistance is automatic. Often there is no time for queries or discussion, that’s why many departments (Chicago Police Department) adopted the 10 Code. In police terminology, when an officer shouts 10-1 into his/her radio, that means he/she needs immediate assistance; there is no time for explanations. When an outside agency requests assistance, this request is treated as the most serious call the dispatcher can handle. Assistance is immediate and unchallenged. Reviews can be made at a later time when the immediate danger is reduced.

If a mayor of a city can pick and choose which outside agencies they allow their police department to assist, it becomes a slippery slope; do they not allow their officers to assist the FBI when there is a raid on a political ally? How about withholding assistance for the U S Marshals when they serve arrest warrants on a political group that supports your agenda? How about refusing to assist Secrete Service because you don’t like the president? How about failing to assist Drug Enforcement Administration because you believe drugs should be legalized? Slippery slope? Where does it stop?

People must choose between lawful actions and lawlessness. There is no in between.