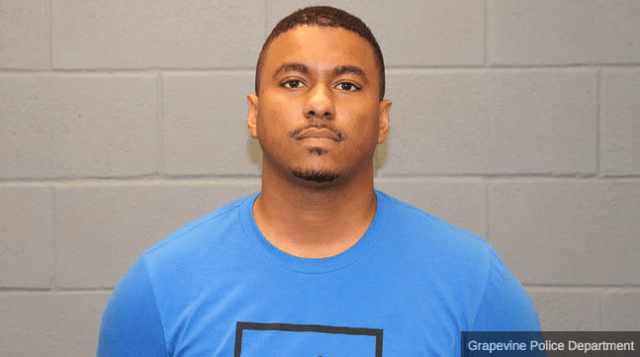 Grapevine police have arrested a loss prevention officer, accusing him of coercing a woman into sex to avoid being arrested for shoplifting. Detectives are now worried there may be more victims who haven’t come forward out of fear, Monday, August 12, 2019. (Grapevine Police Department)

GRAPEVINE, Texas – Grapevine police have arrested a loss prevention officer, accusing him of coercing a woman into sex to avoid being arrested for shoplifting.

Now, detectives believe there may be more victims who haven’t come forward out of fear.

The victim came forward to Grapevine police in July reporting that the sexual assault occurred in early May.

An investigation found evidence on the suspect’s cell phone that GPD said leads them to believe there are more victims.

Police arrested Alex Landry at an apartment in North Richland Hills on August 8.

The 29-year-old is accused of sexually assaulting the woman inside the Burlington Coat Factory loss prevention office, reported NBCDFW.

Landry had been working at the store as a loss prevention officer for a few months, according to GPD.

The victim said Landry caught her stealing items from a Forever 21 store, which is also located inside Grapevine Mills Shopping Center.

As a result, she said Landry took her back to his Burlington Coat Factory loss prevention office, according to the arrest warrant.

There, she says he took a picture of her and her driver’s license.

The victim told police she was fearful because she admitted to stealing the items and knew she had warrants out for her arrest.

She alleges he then told her based on the amount of merchandise she stole it would be a felony and that she could get arrested or ‘fix it.’

The woman says Landry pulled down his pants and coerced her into having sex with him to avoid calling police.

The woman then left and did not immediately report the incident.

After she reported the crime to police in July, detectives began investigating.

At one point officers seized Landry’s cell phone and say they found photographs of other women in the loss prevention office.

Detectives don’t know who the women are but say they could also be victims, according to the police department.

“Our immediate reaction is: are there more victims,” said Amanda McNew, spokeswoman for Grapevine Police. “If so, we’ve got to get them identified. We want to help as many women as we can.”

Police found Landry never reported the theft involving the alleged victim to police as is protocol, according to GPD.

Consequently, detectives are worried he may have had other interactions and not reported them.

Police contacted the manager of Forever 21 who told detectives that in early May he confronted a suspicious man in the store who later identified himself as ‘mall security,’ according to the arrest warrant.

However, Landry did not work as a mall security officer, according to GPD.

Police urge women to report any incident regardless of any theft on their part.

The victim who came forward is not being prosecuted for shoplifting.

Landry is charged with sexual assault, a second degree felony. He was booked into jail on August 8 and is currently out on $25,000 bond.