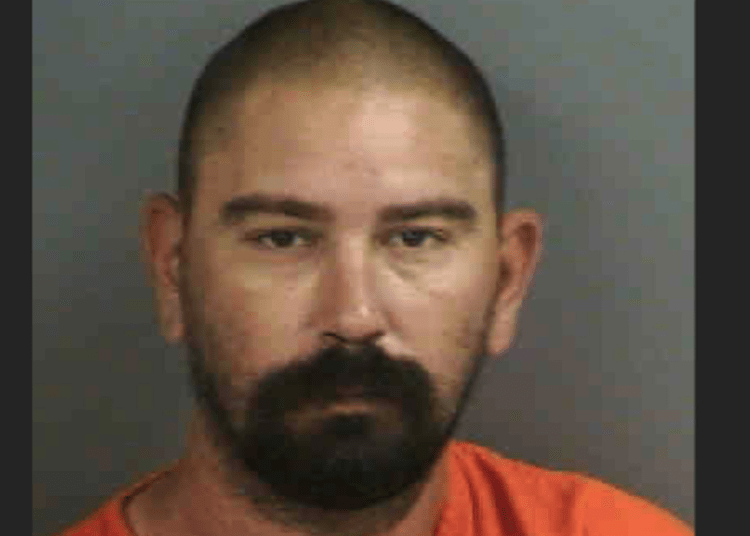 COLLIER COUNTY, Fla. — The Collier County Sheriff’s Office arrested a suspect after finding the body of a missing man buried in a shallow grave at the rear of his property. Investigators learned the homeowner murdered his tenant after discovering the victim was engaged in lewd conduct with underwear belonging to the suspect’s girlfriend, according to reports.

Michael A. Pritchard was taken into custody after the sheriff’s office discovered the missing man’s body buried on his property on Friday.

Collier County Sheriff’s Office detectives today arrested a 35-year-old Golden Gate Estates man on a murder charge after a body was discovered buried on his property.

Michael Allen Pritchard is in the Collier County jail charged with second-degree murder.

On Thursday, detectives received information about a Collier County man who had previously been reported missing. A witness told detectives that Pritchard confessed to having shot the missing man and to burying his body next to his house.

Detectives executed a search warrant at Pritchard’s home and surrounding property on 10th Avenue Northeast where they discovered the body of the missing man buried in a shallow grave near the residence as described by the witness.

CCSO is not releasing Pritchard’s address because it could identify the victim whose identity is protected under Marsy’s Law, a voter-approved amendment to Florida’s constitution that protects victims of crime.

Detectives said Pritchard and the victim knew each other.

Detectives located Pritchard on the property and placed him under arrest around 7:30 this morning. He was transported to the jail where he was booked on the felony murder charge.

The victim was reported missing by his family earlier in the week.

Although the sheriff’s office simply said the victim and suspect “knew each other,” WINK-TV reported the victim was a tenant of Pritchard’s who paid rent and lived with him on the property where his body was discovered.

Pritchard, whose nickname is “Loco,” reportedly has “a history of erratic and violent behavior,” according to the Naples Daily News, citing details from the arrest report.

Pritchard was booked at the Collier County Jail on one count of second-degree murder and is being held without bond, Law & Crime reported.

According to Law & Crime, online records show that he was previously arrested Jan. 22, 2019 and charged with one count each of battery for touching or striking another person against their will and resisting a law enforcement officer without violence. The records say he posted bond the following day and had a court appearance on Feb. 2, 2019.

It’s unclear how the case was dispoed.