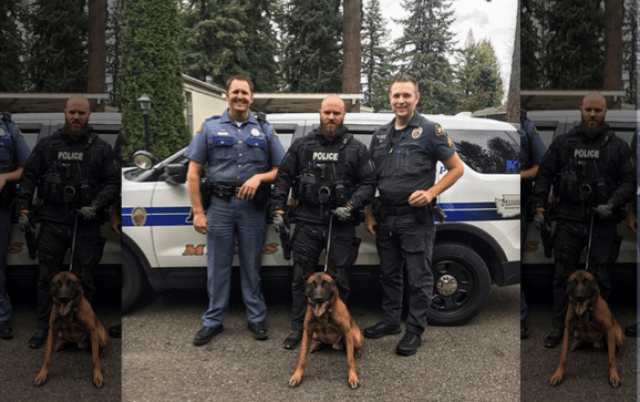 MARYSVILLE, Wash. – “Good boy” is what K9 Steele likely heard after capturing a woman who managed to evade police during multiple vehicle pursuits. Nevertheless, the woman who apparently thought she could out-run patrol units found out the hard way she could not successfully hide from a police service dog.

A driver was clocked going 110 mph by a state trooper on I-5 near Marysville’s Island Crossing Sunday afternoon. As a result, the trooper initiated a vehicle stop. But the 27-year-old woman driving the car would not yield and instead exited the freeway at SR-531, troopers said.

The trooper terminated the pursuit once she drove into an apartment complex. However, a short time later, reports came in about a car driving erratically on I-5 again. Troopers responded and found the woman on the 88th Street on ramp. A second chase began that wound throughout Marysville until she stopped in a mobile home park and fled on foot, KOMONews reported.

Consequently, that prompted a call to the Marysville Police Department, where K9 Steele was summoned on his day off for a little help. After searching for the woman, he promptly pulled her out from her hiding location beneath a parked car. Troopers said the woman was taken into custody.

KOMO did not report if the woman received injuries, nor did they provide her identity.

Troopers said the woman wouldn’t pull over because she didn’t have a driver’s license.